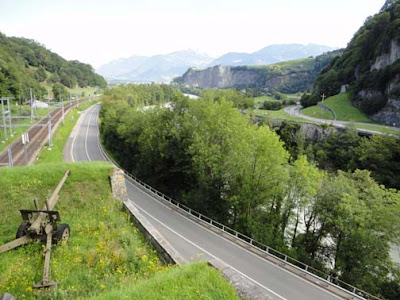 I'm at a narrow pass about 60 miles from Geneva, Switzerland, 30 miles from Italy and the formidable Alps. Through the centuries there have been fortifications on this site. The only direct route between France and Italy passes through this narrow pass. I snapped this photo from Saint-Maurice Castle which has been guarding this pass since 1476. Note the train tracks (which pass through a tunnel), the highway, then that's the Rhone River on the other side of the trees and finally there's another road in the far right of the photo. 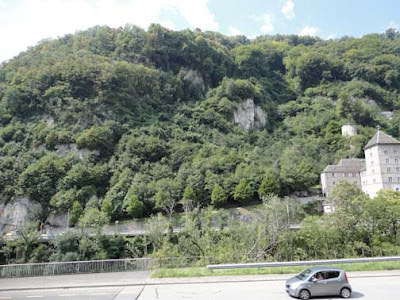 In the right of this photo is Saint-Maurice Castle. Right above it you see a cone-shaped structure-part of fortifications built in 1830. Just on the other side of the car is the Rhone River. Now, you can't see it but way above the cone-shaped structure is the entrance to Fort Cindey as well as Grotte aux Fees ("Cave of the Fairies"). 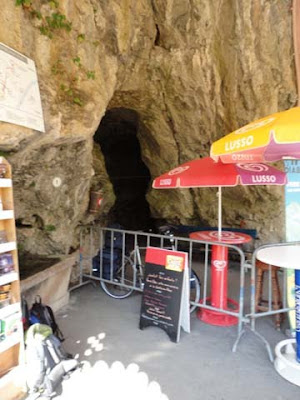 Believe it or not, this small natural opening behind my bike is the entrance to Fort Cindey (built between 1940-1946 and housing 173 soldiers) and Cave of the Fairies. This limestone cave was first explored in 1831 and it runs for several miles in various directions including the big attraction: a 253 foot high underground waterfall--purportedly the world's highest waterfall in a natural cave. To the right of my bike is an outdoor restaurant. It's a good hike to get to this point as there is no road. The switchback dirt trail leading up here is a pain as every six feet you have to step up over a log. I mention this because I didn't feel safe leaving my bike unattended at the closed castle and ended up lugging it all the way up.


I specifically waited until a hot day in August (expected to reach 90 degrees) to visit the fort because I knew it will be very cold inside the mountain. The Cave of the Fairies is the lure here with the fort not very well advertised. Fort Cindey was decommisioned in 1995 and have guided tours only in the summer. 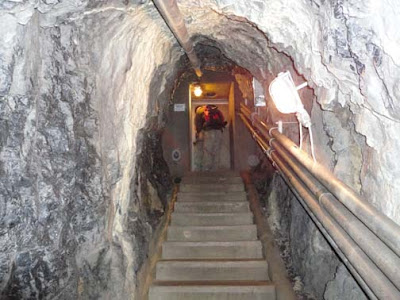 The tour starts at 10:30 AM and lasts two and a half hours. The guide talks to me in French and from what I understand he's saying the tour will be done in French. "No problem", I reply. Wow, nobody else shows up and it looks like it's just the two of us. We enter the cave and follow the dimly lit and wet trail for about a 100 yards. The guide then hangs a left and up these stairs where he unlocks a thick steel door (no sign signaling this is the entrance to Fort Cindey). After entering, the guide locks the door, holds up the key and places it into a vest pocket. He tells me in English "in emergency here's the key". Whoa, I've taken several of these below ground and inside-the-mountain tours of former military installations and never had the guide say this. Jeez, is he thinking he might have a heart attack or something else and I'd be trapped inside this fortress? 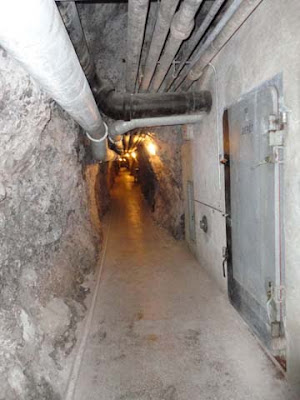 So, it turns out my guide does speak some English and it works out well between us. After closing the initial steel door we pass through two more steel doors which serve a purpose. If we had been outside and there was a gas attack we would need to stay in the chamber between the two steel doors for hours while the air is filtered clean. 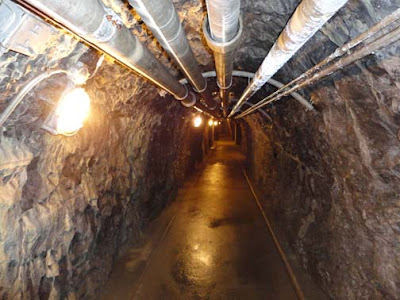 The Swiss are known for their feats of engineering whether it be tunneling through mountains or building bridges over seemingly impossible terrain. 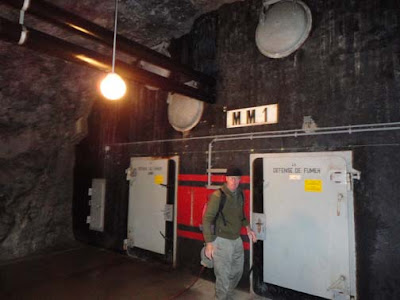 My guide, who I guess to be in his early 70's, used to be the chaplain at this fort before it was deactived in 1995. The reason he's in great shape probably has to do with him walking up and down the slippery corridors plus, he must have unlatched, opened, closed and latched at least 30 of the steel doors like the ones seen in this photo. The door he is about to open used to be the munitions storage room. 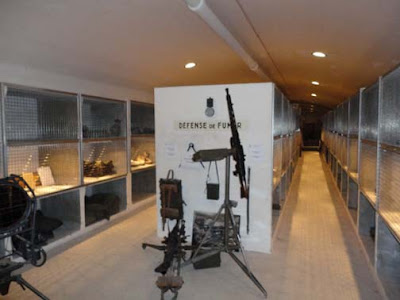 The munitions room. It now displays bazookas, grenade launchers, uniforms and other items. It's amazing how they dug into the mountain and then built the various rooms. There's an industrial-size kitchen as well as a 20 bed hospital and a 23,000 gallon water reservoir (a three month supply of water). How difficult it must have been to get cement, bricks, drilling equipment and so forth up here. Horses, mules or sleds couldn't get up that dirt trail I came up on. Officers barracks. Two to a room with a sink. 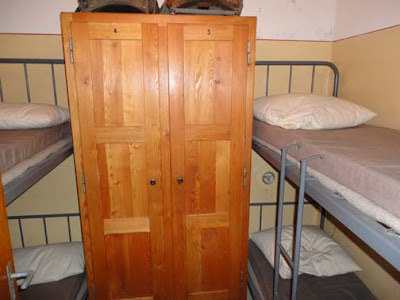 Soldiers barracks. Four to a room and no sink. Soldiers slept in shifts. 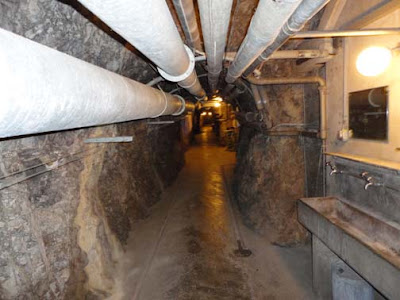 Washing up and shaving area. There are showers. 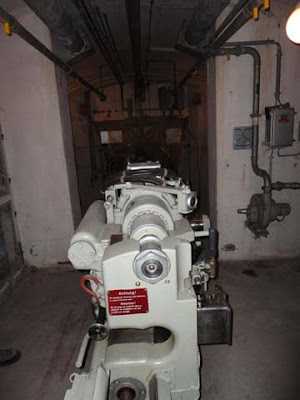 This is one of the big guns. The fort was equipped with two 105 mm guns in individual casemates (range up to 15 miles), four 90 mm anti-tank cannons and five heavy machine guns with telescopic scopes. It took a crew of nine to operate one of the big guns. 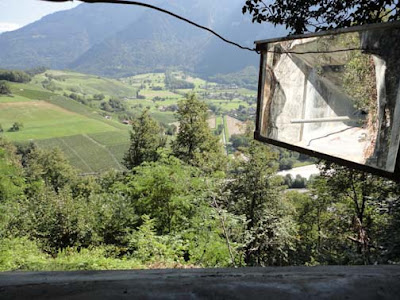 This is a view out from one of several observation posts. The mirror lets the observer see the anti-tank/artillery cannon sticking out of the cliff face. Why? The gun crews can not see outside. The observer notes tanks or infantry approaching, then relays this info (via phone) to the command center deep inside the fort, the command center does the calculations and then calls up the cannon crew with the coordinates on where to point the cannon. 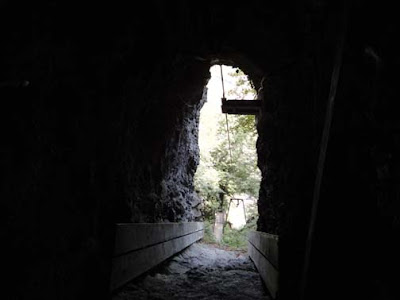 It's at the end of the tour that I learn about the hidden aerial cableway. This is how supplies and equipment were brought up. The cab seats four and there's a weight limit of 1,000 pounds. Since this is the most vulnerable part of the fort a massive 15 inch steel door closes this off. The guide lets me shut the door and it has to weigh several thousand pounds. 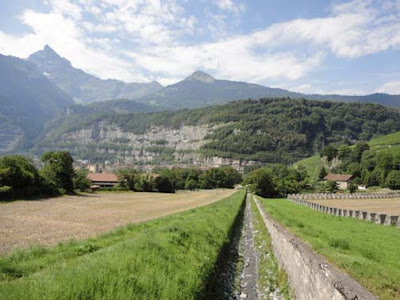 While in the fort I looked through the telescopic scope on one of the machine guns and could clearly see this canal and tank barriers in the distance. In this photo look in the middle and to the barren white cliff face to the left of the forest of trees. That's where the cannons are facing out. From that distance the machine gun could easily mow me down, firing a thousand rounds a minute! 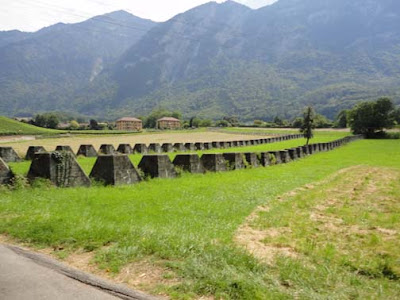 Here's another view of tank barriers lined-up in rows. Why are they still there? Hey, you think it would be easy removing 'em?

At the end of the tour I was absolutely freezing as it must have been forty-something degrees inside. Of course I was wearing a winter jacket but my hands had almost become numb. I was in such a hurry to get back outside into the hot air that I passed on making my way in the cave to see the waterfall.