I think you know by now that I have a thing for macarons. I've literally gulped, wolfed-down, eaten, snacked-on, tasted, swallowed, sampled, chewed-on, bitten-into and devoured thousands of macarons from hundreds of patisseries, chocolatiers, supermarkets and boulangeries. Macarons are delicate treats and the shelf life of a good macaron is two days max. A few years ago in Lausanne, Switzerland, where I live part of the year, Laduree opened a shop. This Paris-based palace of sweets has been regularly acclaimed as having the best macarons in the world. However, I've read articles disputing this with Pierre Herme and other Paris-based contenders considered better.

So, how does one compare macarons? A minimun of at least three macarons were consumed at each contender. If available, vanillla, caramel and pistachio macarons were ordered so as to make same flavor comparisons. Who ended up atop my most favored list? Laduree. 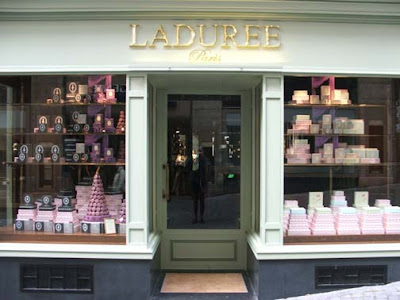 The Lausanne, Switzerland Laduree outpost doesn't serve pastries so I was surprised (and happy) in finding pastries on display in several of the Paris locations--though no chocolate tarts. The stores do a booming business with long lines going out the door. 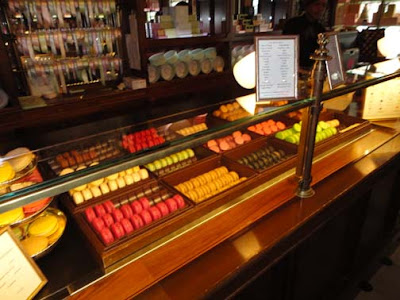 My favorite Laduree macaron is the almond morello cherry (it's seasonal). Website: http://www.laduree.com/ 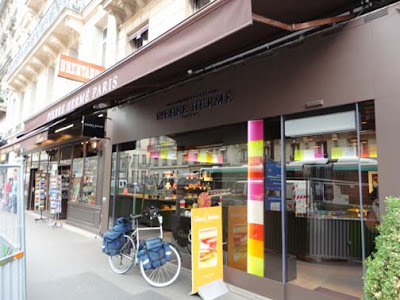 This is an exterior shot of a Pierre Herme store. About a half-dozen locations in the Paris area. 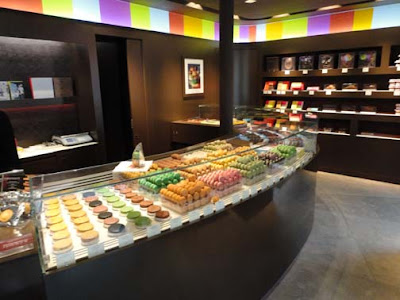 Excellent macarons. However, I think Pierre Herme tries too hard to be exotic. You want plain vanilla? Forget about it as it's olive oil vanilla or nothing. The asparagus macaron sounded interesting until I learned it also contained hazelnuts (don't like hazelnuts). Website: http://www.pierreherme.com/ 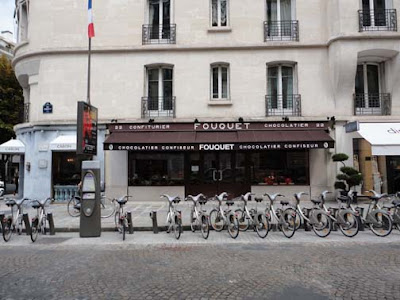 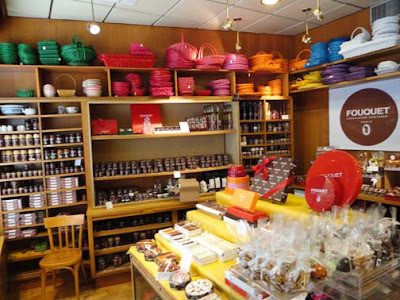 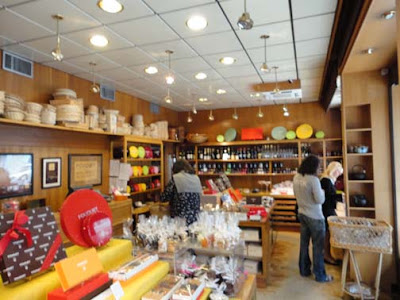 I visited two of the three Fouquet shops. Website: http://www.fouquet.fr/ 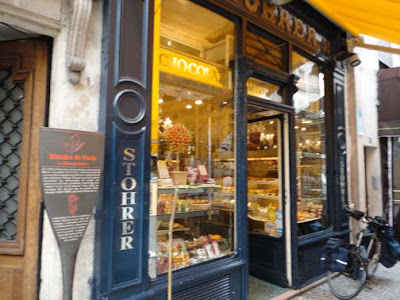 Patisserie Stohrer has a long, long history. Can you believe it dates back to 1730 and has remained at this SAME location? 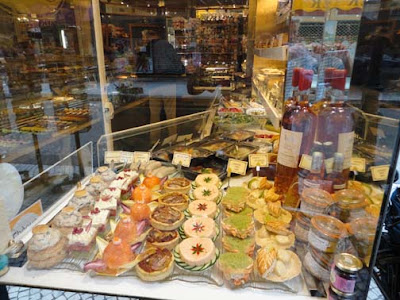 Stohrer's store is packed to the gills with chocolates, pastries, sandwiches, wines, jams and more. 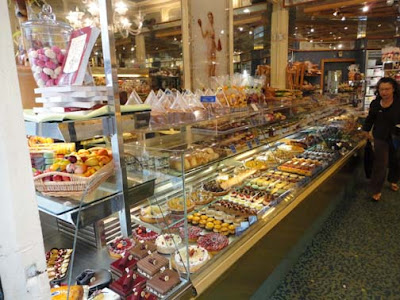 Stohrer stands on a tourist filled, pedestrian-only street lined with small cafes. That had something to do with my decision to pass on tasting anything. The pastries 'looked good' but I've seen places like this in many cities where this kind of eye candy is geared toward the tourist and has no taste. With so many opportunities for sweets in Paris I could afford to take a pass. Website: http://www.stohrer.fr/ 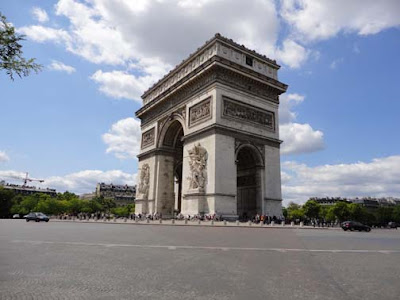 Twelve busy boulevards empty onto the Arc de Triomphe and the result is a non-stop carousel of vehicle traffic. So, why does this photo show very few cars? I arrived in Paris on Sunday and it was the last day of the Tour de France, cycling's biggest race. The famous Champs-Elysees boulevard is closed (starting at the Arc de Triomphe) and riders cycle up and down a circular circuit with massive crowds cheering them on. A few days later I was cycling the Arc de Triomphe at 5:30 AM (it was still dark) and it was even more empty of vehicles than in this photo. 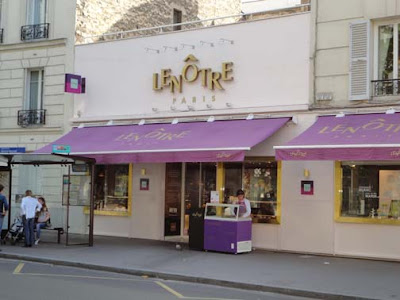 Arriving in Paris on a Sunday I wasn't expecting to find much of anything open, let a alone a high-end patisserie. Lenotre is a ritzy gourmet shop offering chocolates, pastries, salmon sandwiches, caviar, wine and the like. I had excellent macarons and an excellent raspberry eclair. My favorite item though was a carac filled with a light chocolate mousse. A carac is similar to a tart but smaller with a thicker shell. I enjoyed this carac so much that I returned on four different days to this store along with stops in another location. But, to no avail as the carac was never seen again.

I had never heard of Lenotre until I stepped into the store. It turns out Lenotre is part of Accor, one of the world's biggest hotel chains (Sofitel, Novotel among others). With 16 stores (including one in Las Vegas) worldwide, 1,400 employees and even a cooking school, Lenotre is a big-time operation. Checking out Lenotre's website I saw many of the pastries that were on display in the stores but, not my carac. Must have been a seasonal offering. Website: http://www.lenotre.fr/ 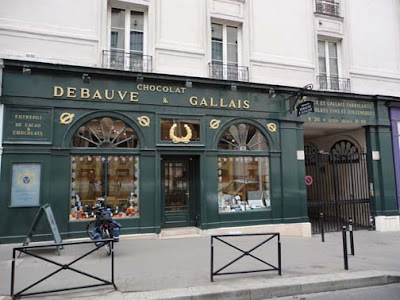 Chocolatier Debauve & Gallais dates back 210 years and has been in this same location since 1818. Didn't try anything though as macarons or pastries were not on the menu. 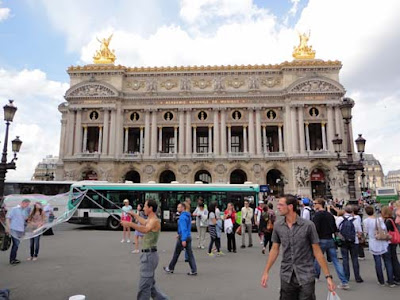 This magnificent edifice is Palais Garnier (built 1875), it's the old Paris opera house. Still used for ballet. I snapped this photo in front of a metro (subway) entrance and gave up waiting for the non-stop buses to disappear. Behind the opera house is the flagship store for Galeries Lafayette, the French department store. A zillion people (most of them tourists) are in this area. Though you can't see because of the idiot buses, there're are a series of steps in front of the opera house and it's a great place to sit and people watch. 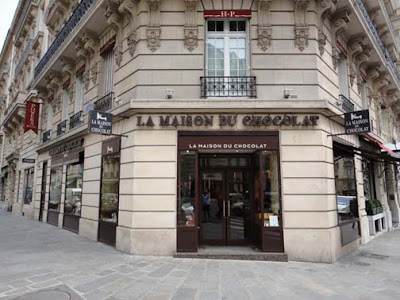 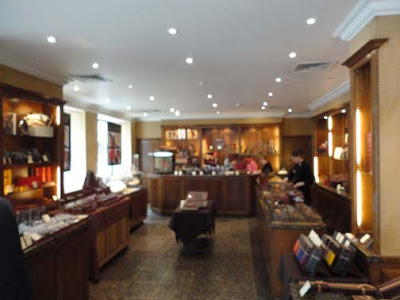 The chocolate tart was very good though the shell could be better. The macarons looked terrific but I passed on buying any. Why? Just after snapping this photo a snotty sales woman scolded me and said photos were not allowed. She wouldn't explain why it wasn't allowed. 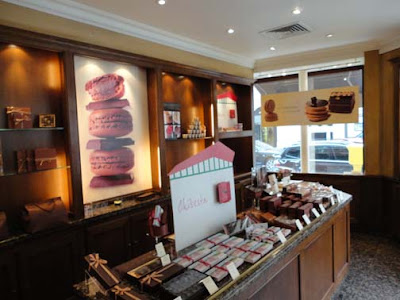 The pastries (including chocolate tarts) are in a window display so I went outside to try to photograph them from the street but the photos came out too glassy. Website: http://www.lamaisonduchocolat.com/ 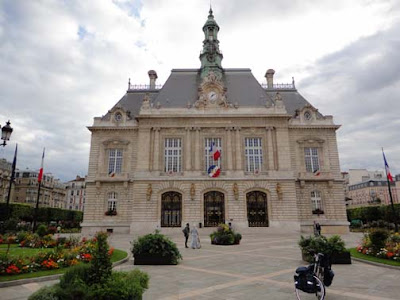 Remember how I like to snap photos of city hall buildings in Germany? France has beautiful ones too, although they're a completely different style. This is the city hall for Levallois-Perret, a well-to-do suburb of Paris. 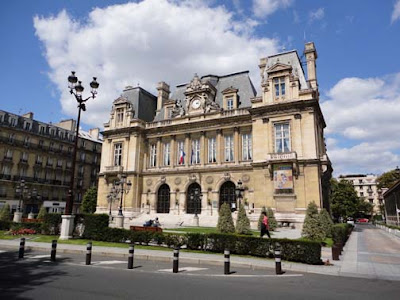 This somewhat similar looking city hall is for neighboring Neuilly-Sur-Seine, an even more well-to-do suburb.