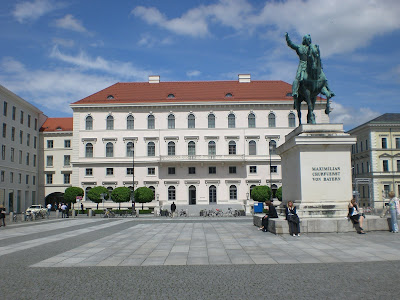 Siemens, with over $110 billion sales, is one of the world’s biggest companies. The four-story pink-colored head office occupies a regal position in one of Munich’s most prestigious squares—several blocks from the royal palace. Matter of fact, built in 1825 for Prince Ludwig Ferdinand, it’s known by locals as the “pink palace”. I visited the company almost 20 years ago and then again three years later because I received such a lousy reception the first time. The second visit was just as crummy as the first and it wasn’t until a month later when I wrote about the second visit that I realized it was the same jerk (for loss of a better word) who gave me a poor reception the first time around.

But, that’s not what this story is about. I remember the jerk from the two visits telling me that over 1,000 people worked in the building. I was surprised and told him it didn’t look like a very big place. The jerk said there were two new modern buildings in the back connected by skywalks. So, afterwards I did a walk around the block and that’s when I found the konditorei (pastry shop) and its delicious Linzerschnitten bars on a side street. These scrumptious bars have a raspberry jam filling sandwiched between two overdone wafer-like cookies. The thin frosting coating on top is gooey and sweet. Other bakeries make ‘em but they’re nothing compared to these. So, guess what? I dropped by and find out they no longer make the bars. There was a poor selection of pastries for sale and though the counter help denied it I have a feeling there’s a new owner. This photo of the Linzerschnitten bars dates back 10 years when I snapped it during a visit and then posted under the “tasty goodies” section of my corporatetrivia.com website. 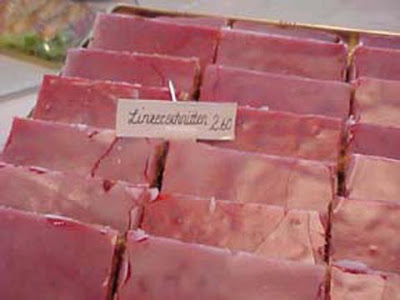 Posted by Paul the biker at 1:41 AM No comments: