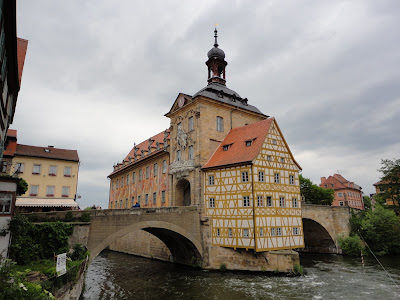 Unlike many German cities, Bamberg escaped Allied bombing during World War II. Bamberg's old town houses the largest collection of buildings in Germany (over 1,300) to have been preserved in their original state. In 1993 its medieval old town was designated a UNESCO World Heritage site. It isn't easy getting on UNESCO's list and so this is a big whoop-dee-do. This is the old city hall. It's built on a spit of land in the middle of the Regnitz river and dates back to 1745. It's reached via a bridge on either side. 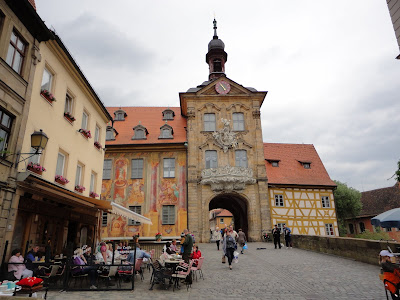 View of the old city hall after crossing a bridge. It's now a museum.. 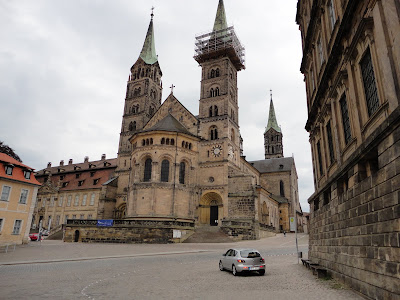 Bamberg spreads over seven hills and standing atop each is a church or monastery. This cathedral is the largest of the seven.

I'm not much of a beer drinker but Germany brings out the beer drinker in me. Bamberg's population is only 70,000 but it's home to seven breweries. This building houses Brauerei Faessla. 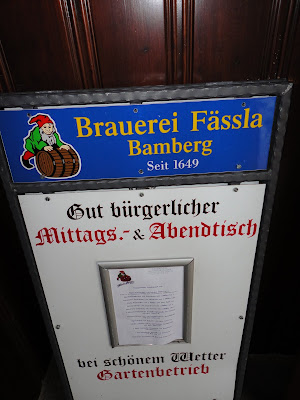 Yep, Brauerei Faessla has been around since 1649! Entering the building you find a bar and several dining areas. The plan was to return later in the day for dinner but, coming back no seats were to be had as it was packed with locals. 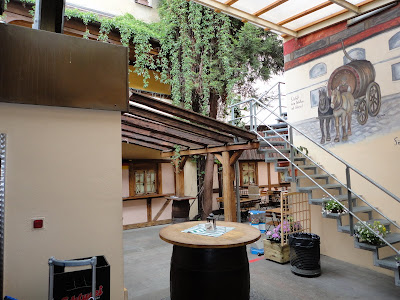 Keep walking down the hallway and it's a small open-air beer garden.
The brewery also doubles as a small hotel. The stairs leads to some of the hotel rooms. 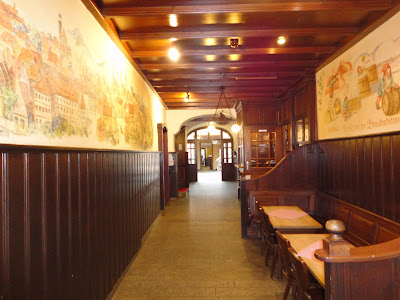 Keep walking past the wall murals and you'll enter the beer production area complete with loud clanging of beer bottles proceeding along the production line. 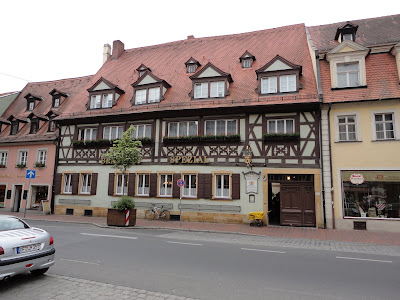 Hungry and unable to find seats at Brauerei Faessla, we venture across the street to Brauerei Spezial. They have been making beer here since 1536. Not just any beer but, SMOKED beer. Oh man! the beer was fantastic and so was the food. 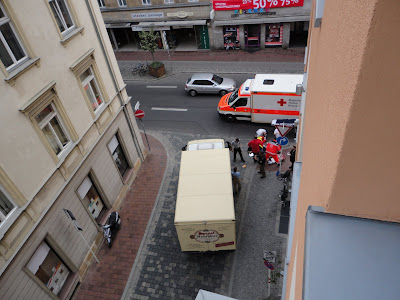 Bamberg is very bicycle friendly. Matter of fact, tourists have to watch themselves as part of the sidewalks are reserved for bicyclists. We were awaken early one morning (6 AM!) by the sound of a woman screaming. Our room overlooked an alley way and looking out I could see a woman sprawled on the ground next to her bike. Turns out she had been hit by the beer truck in the photo which hadn't stopped correctly. 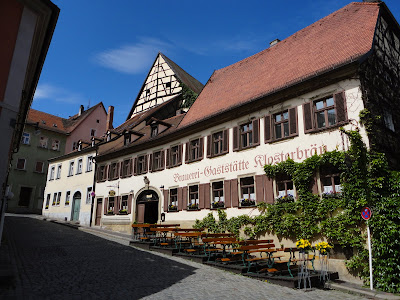 The beer keeps getting better and better as the next day we have lunch at Klosterbraeu, the oldest brewery in Bamberg--serving suds since 1533! 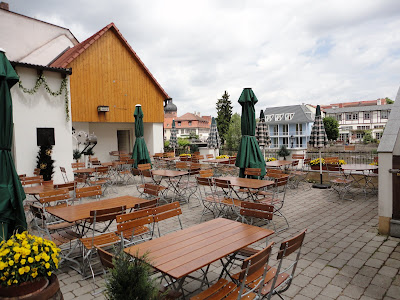 Until several years ago, smoking was allowed EVERYWHERE in Germany. Meaning, as someone who vehemently hates the smell and stench of tobacco, I could never eat in restaurants thanks to German's love of cigarettes. This is the beer garden area outside Klosterbraeu brewery. 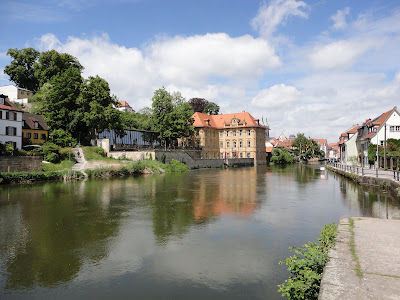 View of a mansion along the riverfront. 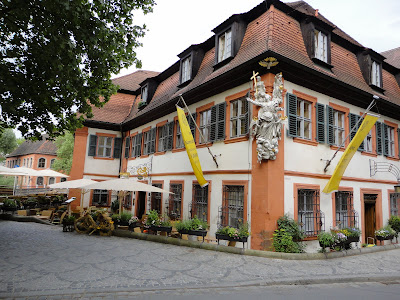 Had lunch here and of course I had to try another local beer. Located next to the river and built in 1762 it was part of a mill/waterworks complex.

Every May for the past dozen years Heidy and I ditch the land of cows and chocolate (Switzerland) and head for the land of sausage and beer (Germany) to visit Heidy's aunt in Pfrarrkirchen. Journey 100 miles due east of Munich and it will bring you to the delightful farming town of Pfrarrkirchen.

Each year a different route is taken. We were last in Regensburg (population 130,000) back in 2005. In 2006 the city's medieval city center was designated a UNESCO World Heritage site. In other words, the United Nations placed Regensburg's old town on its list of historic places. I want to return again and soak up more of this historic city and Heidy has fond memories of great shopping. Having taken so many photos during the last visit I only snapped a few this time. 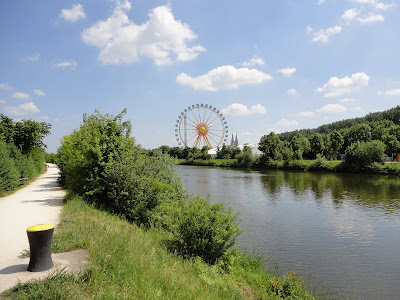 From the hotel it's a 20 minute stroll along the Danube river to the city center. This photo isn't of the Danube (it's on the other side of the trees on the right) but, of a canal running alongside the Danube. After the Volga river, the Danube (1,700 miles) is Europe's longest river. Long, low-slung barges filled with coal, minerals, commodities and lord knows what else ply the Danube. 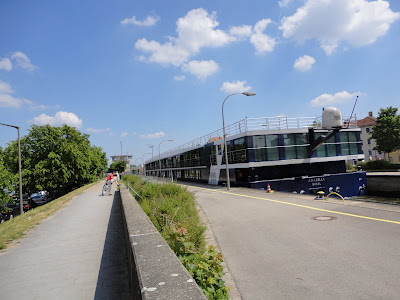 Cruise ships on multi-day cruises are very popular with tourists. A few minutes earlier this ship passed me but, I caught up as it stopped to traverse a series of locks. 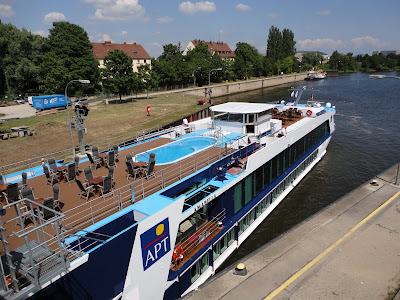 It's one of the fancier ships cruise ships seen. Note the pool atop the deck. 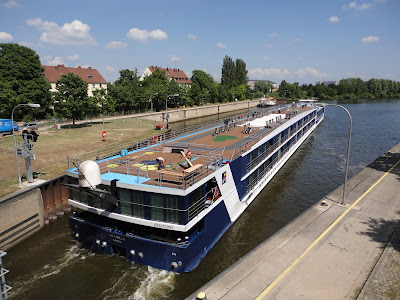 These ships are long, low and silent. 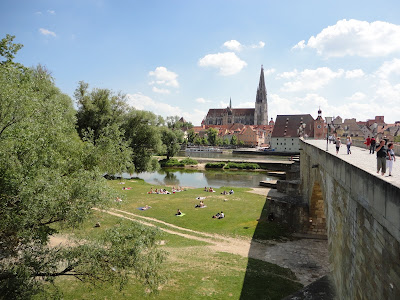 Built of stone and dating back to 1135, the Steineme Bridge crosses the Danube and deposits visitors to Regensburg's old town. The bridge has historic significance as it opened up Europe to international trading. 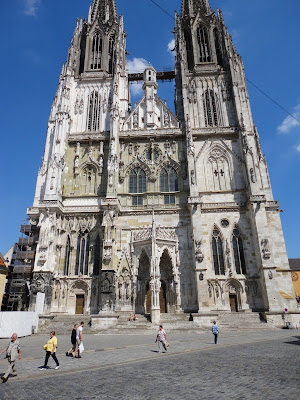 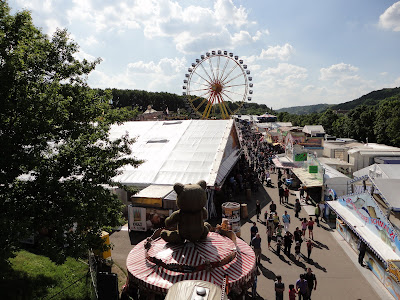 This two-week festival on the riverfront is similar to county fairs in the USA. Wasn't able to find any unusual culinary delights like we have in the USA. You know what I mean, deep-fried Twinkies or watermelon slices soaked in chocolate.
Posted by Paul the biker at 1:08 AM No comments: