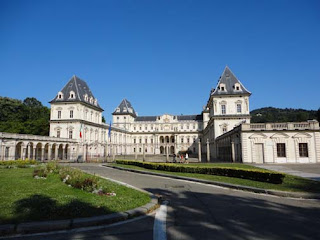 Turin, with a population of 930,000, ranks as Italy's fourth largest city. What's the the biggest change I can see since my last visit almost 20 years ago? Turin built an underground metro system to coincide with its hosting the 2006 Winter Olympics. The above photo shows the front of the Castle of Valentino, one of the former residences of the Royal House of Savoy. It is now part of a university campus. 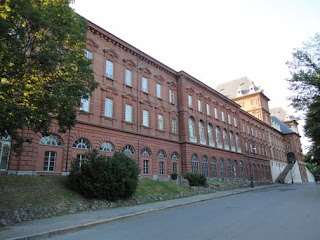 Believe it or not, this red brick structure is the backside of the Castle of Valentino. The wild and crazy Italians have quite a few two-tone buildings like this. 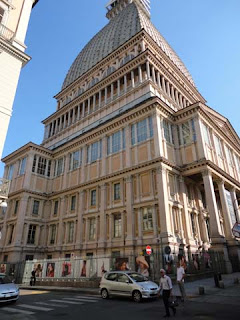 The magnificent-looking Mole Antonelliana is probably the most famous structure in Turin. Built 1863-1889, it was originally conceived as a Jewish synagogue but, financial problems resulted in the city taking it over. At 548 feet tall, it now houses the National Museum of Cinema and reckons to being the tallest museum in the world 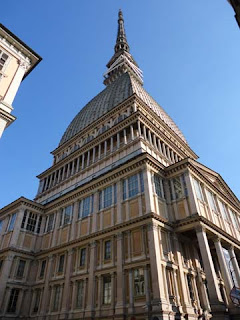 I couldn't get the whole structure in one shot so, this shows the tip. 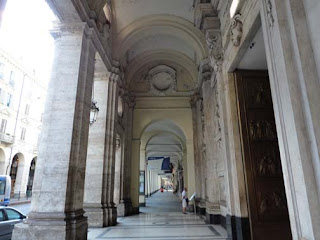 Want to go shopping on a very, very hot or very cold and rainy day in Turin?  No problem, as Turin has blocks and blocks of covered arcades. Matter of fact, Turin supposedly has more covered arcades than any other city in the world. 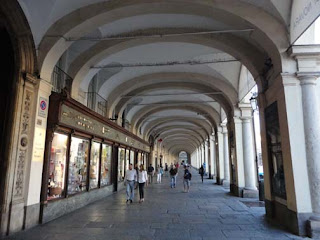 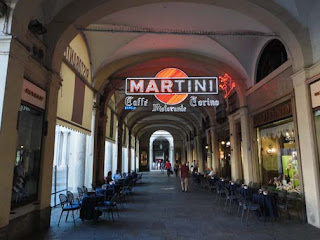 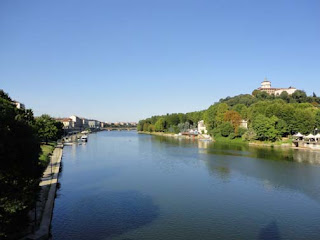 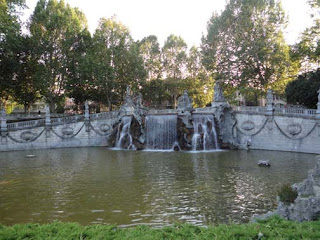 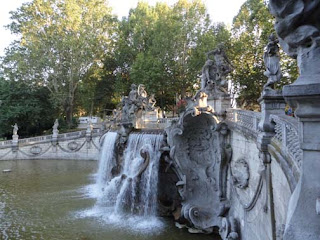 The detail is very amazing. 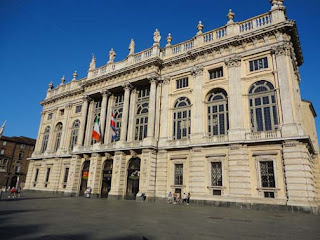 This is Palazzo Madama, a former home to several powerful woman in the 1600's (hence its name which is Italian for Madame)  and since 1934 home to the City Museum of Ancient Art. 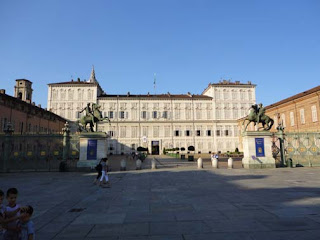 This impressive building, located in the same square as Palazzo Madama, has a more impressive pedigree: the Royal Palace of Turin. 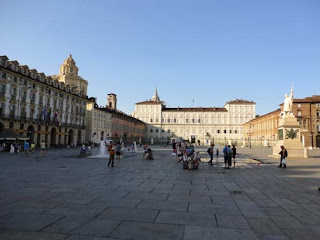 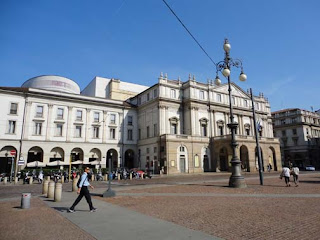 It wasn't until cycling into Milan's city center that I remembered why I didn't like the city. The streets are lined with large cobblestones. The bike and your body shudder non-stop making cycling miserable. Built in 1778, this photo shows the world famous La Scala opera house. 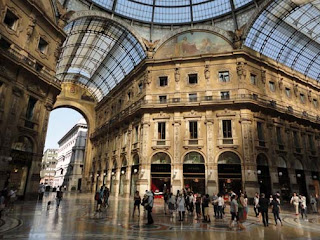 This shopping arcade in Milan is one of the most famous in the world. 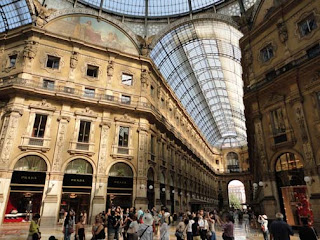 You can't help but stop and gawk at the detailings on the ceilings and roofs. 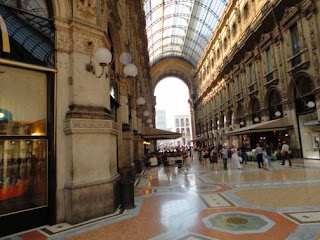 Expensive boutiques line the arcade and you can imagine the rents charged for this high traffic location. But, that's not a  problem if you are an international juggernaut like McDonald's. I snapped this standing next to the entrance of McDonald's

Through the Mountains to Turin/Milan, Italy, Part 1 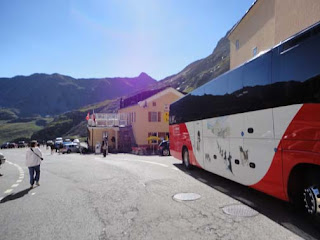 My last visit to Turin, Italy was back in 1995 and was curious to the changes (if any) since hosting the Winter Olympics in 2006. My bike and I decided to take the road less taken. In Lausanne, Switzerland
I hopped on a train for the 45 minute trip to Martigny. In Martigny I placed my bike into the cargo bay of a bus and we started up through the Swiss Alps. After two hours of zig-zagging steeps grades, including having to transfer to another bus, we reached the end of the line---the Great St. Bernard Pass in the Pennine Alps. To the right of the bus stands a building. Since the 9th century there has been a monastery on the site. It's now a hostel (which explains the bus being full with tourists, day trippers and hikers). It's here that the St. Bernard dog breed was created from cross-breeding dogs. The dogs provided security for the monastery as well as becoming mountain rescue dogs. 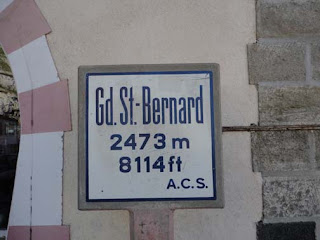 The Great St. Bernard Pass is the third highest road pass in Switzerland. This road has been used since the Bronze Age. Amazingly, back in 1800 Napolean Bonaparte crossed the pass with 40,000 troops. I remember reading about this in high school and thinking --so what. You need to actually physically come here and see the terrain to appreciate the difficulty of the feat. Napolean was attempting to sneak up on the Austrain army laying siege to French-occupied Genoa. His plan worked. Nowdays, cars and trucks use the nearby Great St. Bernard Tunnel or Mont Blanc Tunnel to traverse the mountains. 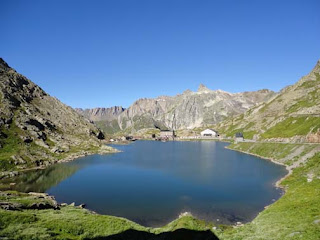 From the summit sign above, this is the view one sees towards Italy.The building you see on the other side of the lake houses the Italian border police and that's where I start the 100 mile trip to Turin AND glorious 20 mile (all downhill!) bike ride descent into Aosta, Italy. 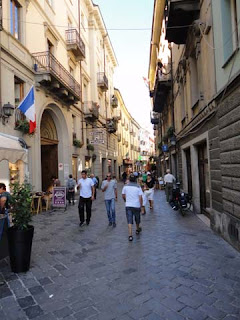 Aosta (population 35,000) has typical narrow street and passageways. But, I manage to find an absolutely delectable pasticceria (pastry shop). 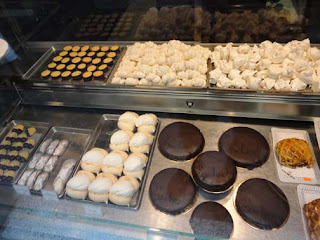 Yep, I took one each of everything you see here and boy were they good! 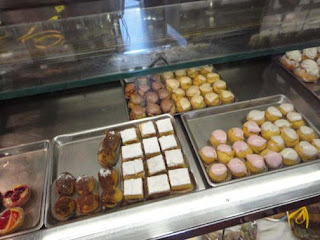 However, see the two trays of what looks to be pastry puffs? They are filled with a pudding-like filling containing various kinds of liquer. Holy moly! they are dangerously good! 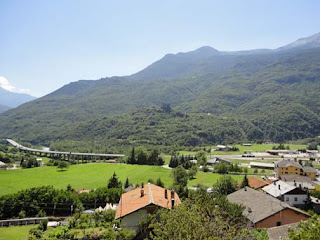 Can you see the castle sitting up on the middle? Unfortunately I have to shrink the pictures to post them here. The road you see is a freeway. 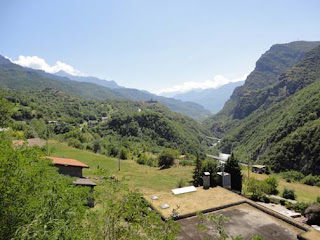 There're ruins of two castles here on the hills in the background. In the right of the photo you can see the freeway road cutting through the narrow valley.
Posted by Paul the biker at 10:44 AM 1 comment: 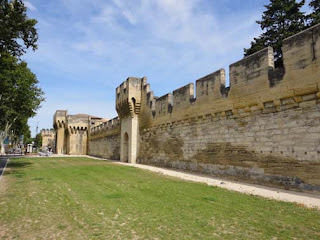 Avignon, France (population 100,000) is awash in tour buses. What's the big lure here? It could be because it's one of the few cities in France with its medieval ramparts still intact around the historic old town area. 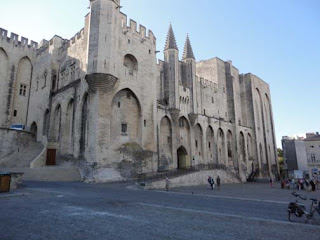 Avignon's old town is a UNESCO World Heritage site and it's this massive structure (Palace of the Popes) which is the jewel. Built between 1335-1364 it's one of the largest Gothic buildings in Europe. What's it doing in Avignon you ask? Between 1309 and 1377 Avignon (not Rome), was the seat of the Papacy. This is where seven popes hung their hats. Built on a natural spur of rock between 1335-1364, this sucker is well-built with walls between 16-17 feet thick. Think about that. I'm six feet tall and if you took three of me and laid me out end to end--that's how thick the walls are! 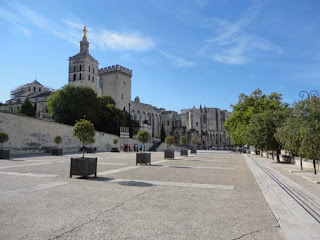 It's 8:30 AM on a Sunday morning when I snapped all the photos. An hour later this same square was swarming with visitors--many hopping off tour buses. That's Avignon Cathedral on the left. 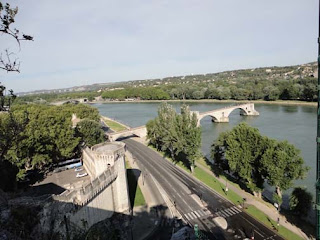 Above the Palace of the Popes is a park. This is the view. That's the Rhone river and note the medieval bridge that no longer spans the river. You have to pay a fee to walk to the end of the bridge. 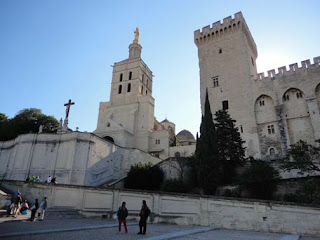 This is a closer view of Avignon Cathedral which is located next to the Palace of the Popes. Built in the 12th century, atop stands a gilded statue of the Virgin Mary.