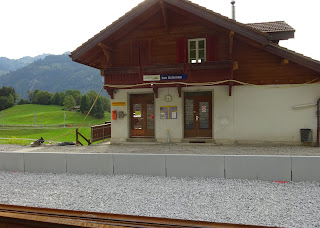 At least once a summer my bike and I hop on a train to the ritzy ski resort of Gstaad and from there it's a 50 mile bike ride back home. I did a blog about Gstaad back in (I think) 2013. The train trip involves traveling along Lake Geneva from Lausanne to Montreux and from there hopping on another train which zig-zags its way up the mountain, goes through the mountain via a train tunnel, snakes it way down the other side to the valley floor below and then make a gradual climb up the side of another mountain to Gstaad.

I mention all this because I've always wanted to hop off the train after it goes through the train tunnel and start my bike ride from there. So, that was the plan. On the train the conductor looked at my ticket then looked at my touring bicycle with the four panniers (saddlebags) and said it wasn't possible because I didn't have the right bike (mountain bike) and there wasn't a road. "Okay, I'll get off at the next stop", I said. The conductor shook his head and said it wasn't possible. If you're wondering why the train makes these stops if there's no paved roads it because the area is popular with day hikers--they come up via the train and spend the day hiking. So, I ended up getting off at Les Sciernes--the train station pictured here. 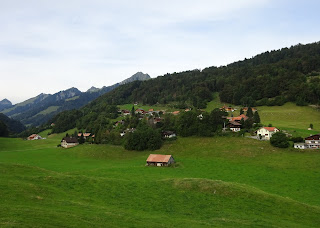 Farms and houses in the distance. 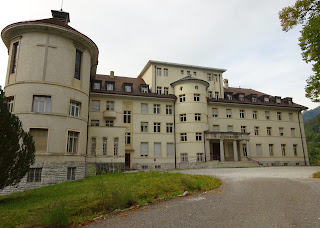 I spot this large abandoned structure tucked away from the road. Was it a hotel? I see the large cross on the left side of the building. 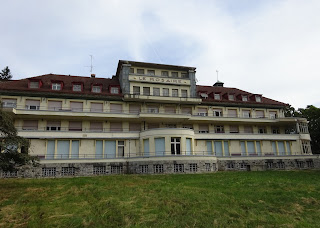 I cycle around the property to the backside and see the name "Le Rosaire" atop the building. Though baptized when little but not a practicing Catholic, I believe the building's name refers to the rosary--the Catholic necklace prayer. Hmm, I wonder why the place is empty. As I get back on the road I pass a man walking his dog. "Bonjour Monsieur, do you speak English?", I ask. "A bit", he replies.  Do you know the history of this place? He says it was built over a 100 years ago and was run by nuns to take care of "special children". I thank him for the information and ponder what he meant by "special children". There isn't any playground equipment or soccer fields around so I can cross off orphanage. Were the children mentally or physically challenged?  I didn't see any ramps or other facilities for handicapped kids. Hmm, being mentally handicapped would make sense. Why? I've read where families used to leave their handicapped kids in isolated places like this and go into the "out of sight-out of mind" mode. 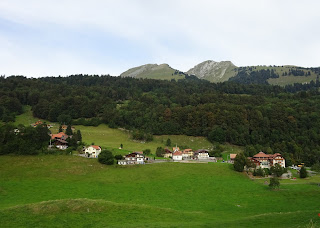 Seeing more homes as I head down. 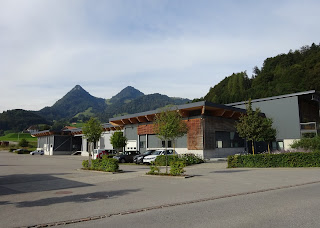 Passing an industrial park a few miles outside of Bulle I cycle around to see what tenants are here. Normally, companies have signs on the sides of their building sporting their name.

Anyway, I see this nice looking building (pictured above) and see zilch signage so that immediately grabs my attention. Two workers wearing white outfits including hairnets are out on one of the loading docks sweeping. Neither speaks English but one says two words I understand; "macaron" and "international". Long-time readers of this blog know I had a fixation for macarons, the sweet meringue-based confection--NOT to be confused with macaroons-the coconut cookie. My addiction to macarons culminated with a trip to Paris where I spent a whole week doing nothing but cycling around the city visiting pastry shops to find the best macarons and chocolate tarts. (over 60 shops were visited). Hmm, this must be an industrial bakery. I go to the main door and find it's locked with no doorbell to ring. 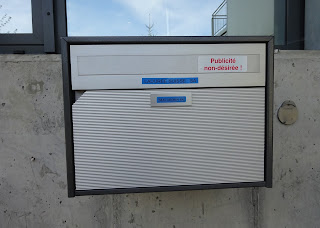 It's then I check the mailbox and see the name "Laduree". Wow, I've stumbled onto royalty! Founded in 1862, Paris-based Laduree is a French luxury bakery & sweets maker. More than anything else, they are known for their macarons. I mention I "had"a fixation for macarons. What happened is Laduree opened a store in Lausanne (where I live) about five years ago and I overdosed on 'em and now frequent them infrequently. Anyway, when the store in Lausanne first opened a truck would make a daily delivery run from Paris. Now, Laduree has a half-dozen stores in Switzerland AND has stores in 20 other countries. There's no doorbell and banging on the glass door brings not a soul.   I guess if they had signage on the building pests like me would stop and try to buy macarons or worse-ask for a tour. 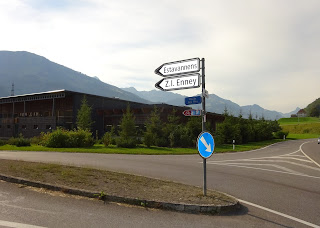 Go to the outskirts of a city in Switzerland or in France and you'll find Z.I.s (industrial zones). This one (that's Laduree's building in the background) is called Z.I. Enney. 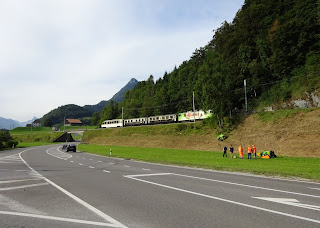 As I'm snapping the picture of the Z.I. sign I turn around and see this view: what are all those guys doing? 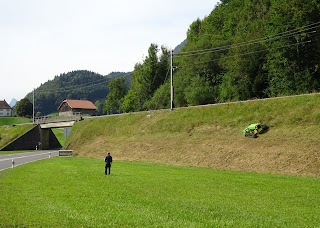 It turns out they're watching the trial run of a remote-controlled lawnmower cutting grass along a steep incline. You can't see it but right above this guy's head is a small drone filming the event. 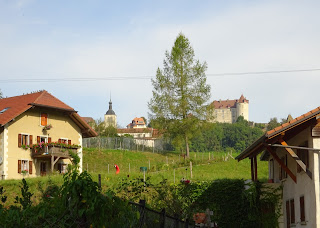 Normally on my ride back from Gstaad I would turn off the main road and follow a marked bicycle route which takes me on backroads passing right by the touristy medieval town of Gruyeres and its splendid castle.  But, today I'm straying from the route to check out several towns. 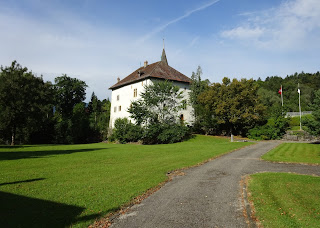 As I enter Broc (population 2,500) I spot a compound of very old buildings with extensive grounds. I can't figure out if this structure is/was a castle or a monastery. 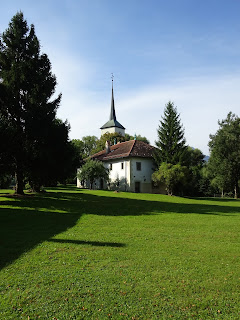 There's also a church on the grounds which makes me believe it's a monastery. 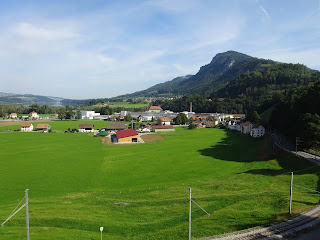 I'm in Broc to visit the visitors center of Cailler, one of the most famous makers of chocolate goodies in the world. Before heading to Cailler I cycle through town and come across this view. Way in the distance I can see the factory. 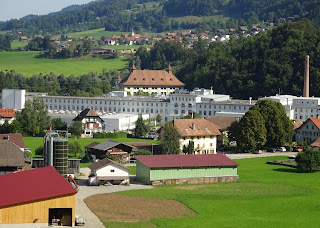 Here's the same shot using the zoom lens on my camera. Notice the village in the background? Well, this shot ends up playing havoc with my schedule. How? I'm on one of Broc's main streets while snapping this photo and a street sign says the road leads to Val-de-Charmey.  For years in Lausanne's local newspaper a hotel in Val-de-Charmey (Hotel Cailler) has run an ad and it looked like a beautiful place. So, I assumed that's the village of Val-de-Charmey up behind the Cailler chocolate factory. 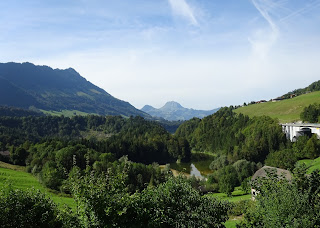 I was very wrong as the road veered right and ended snaking up a mountain for five miles! Here's a view looking back. 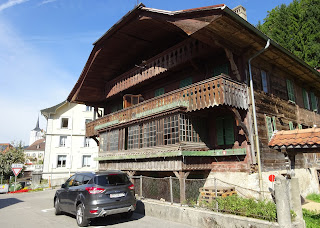 The center of Val-De-Charmey, a village with a population 2,400, has some cool, very old buildings. 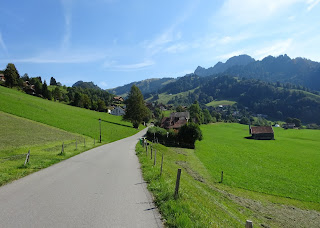 This is a road leaving Val-de-Charmey. 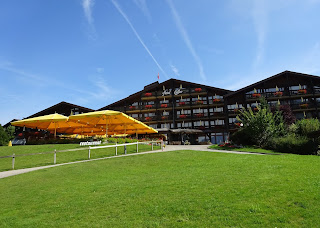 And this is the famous Hotel Cailler. Like every other hotel in Switzerland it's massively overpriced. 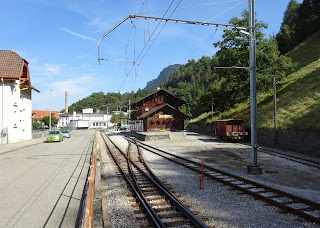 Now back in Broc, I'm making my way to the Cailler chocolate factory via a bike path next to the train tracks. This five mile train spur was specially built to the factory. 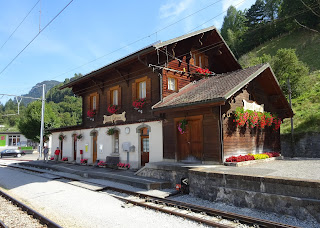 Tourists can hop on a train in Bulle (roughly five miles away) and it'll drop them off here. 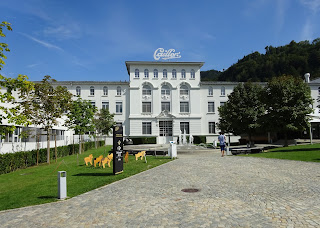 This is the front of the Callier factory, which was built in 1898.  Cailler dates back to 1819 and it was bought by Nestle (the world's biggest food company) in 1929.  How come people in the USA aren't familiar with the name? Until last year Cailler's chocolate hadn't been available in the USA.  Now, you can buy it at certain retailers and on Amazon. It is marketed as a super premium chocolate. I like their dark chocolate bars with almonds. Why does Cailler think their chocolate is so much better? It's the only Swiss chocolate manufacturer that uses condensed milk to produce its milk chocolate. 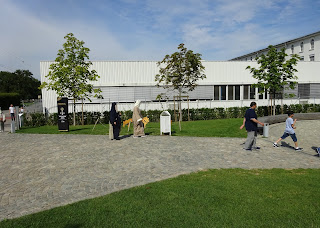 The visitor's center gets visitors from all over. A group showed up with the women completely covered-up from head to toe except for the eyes. 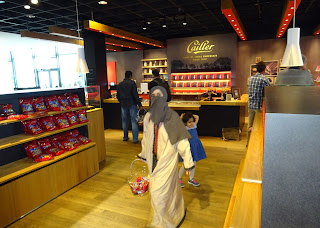 This is inside Cailler's where visitors can purchase products. I was standing next to a English woman who was with her daughter (probably six or seven years old) and overheard this exchange: The daughter said, "Mommy, why do those women hide in their clothes?". The mom said, "that's how they have to dress where they come from". The daughter then says, "why don't the men have to dress like that?". 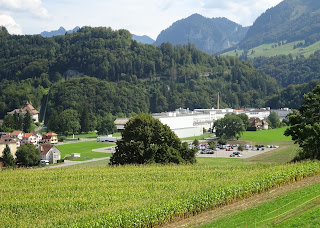 Another view of the Cailler factory in the distance. Back in 2005/2006 I visited over 40 chocolate/cookie companies in Belgium & Switzerland. I visited the head offices of these concerns and many times the head office was at a factory so I had quite a few tours. I never visited Cailler because it's parent is Nestle, based 40 miles away in Vevey. To read those stories go to my website
http://www.corporatetrivia.com, then click on the "Watches & Chocolate" heading. 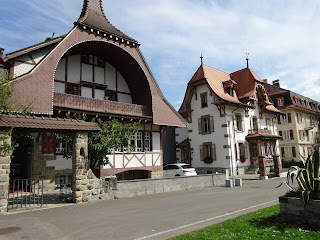 Bulle, population 21,000, is a growing city with lots of new and old buildings. 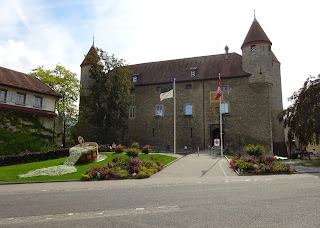 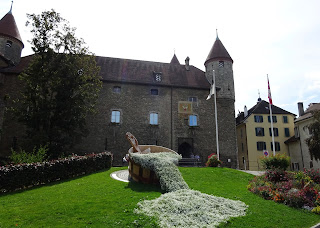 That flower arrangement shows milk overflowing. The surrounding area around is famous for its milk and cheese. 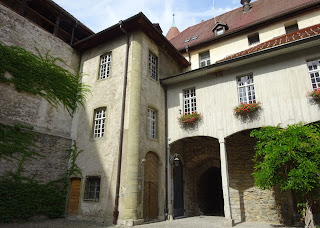 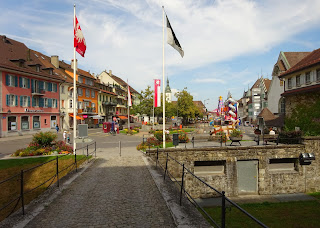 View from the walkway over the castle moat towards the town.
Posted by Paul the biker at 8:57 AM 1 comment: