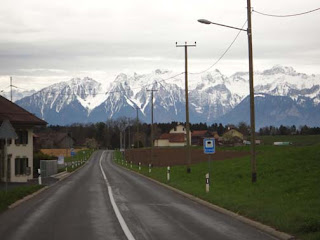 It's late April with temperatures forecast to finally rise above 50 degrees. Could it be? Is Mr. Springtime around the corner? Here I cycle down the middle of the road on the way back to Lausanne. 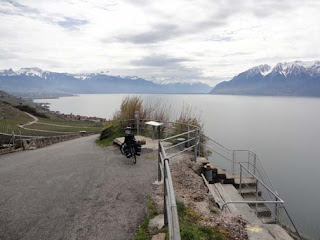 This is one of my favorite spots to eat my lunch. Note the bench on the right. The mountains on the left are part of the Swiss Alps, those on the right the French Alps and, the body of water--Lake Geneva. 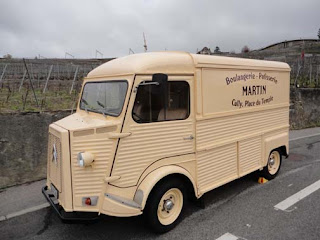 I frequent Martin's boulangerie/patesserie in the lakefront town of Cully. I used to think Martin lived near this particular spot due to his truck regularly being parked here. However, I've spotted this truck parked in various nearby villages days at a time and surmise he uses the truck as a movable advertising billboard. 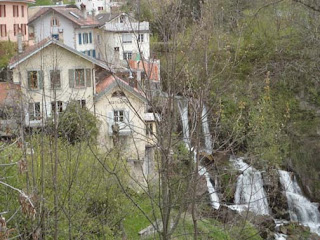 Most of the year this waterfall goes unseen as it is normally shrouded by a forest of trees. 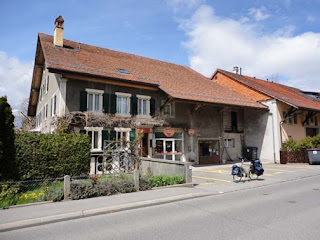 Of course you all know "Paul's 10 year rule". What's that you say? Okay, I'll explain it once again. Trends start in California, it then takes five years to reach New York City and another five years to reach Europe. As an example: the banning of smoking started in Califiornia, five years later New York City got on board and five years after that European countries started getting on the bandwagon. Do you want another example? Well, cupcake stores were big 10 years ago in California then they sprouted up in NYC five years later. Now, 10 years later cupcakes have finally arrived in Switzerland with THREE in the Lausanne area. Cheseaux is a small town about six miles from Lausanne. For the life of me I can't figure out why Val & Caro Cupcakes & Company picked this out-of-the-way location with zilch pedestrian and vehicular  traffic (except for occasional cows) to open shop. 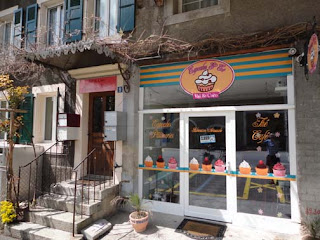 This is a closer view of Val & Caro's store. 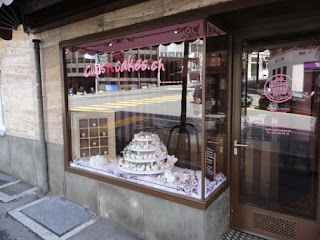 Meanwhile, I give CupsnCakes more of a fighting chance as it is located in the city center of Lausanne. 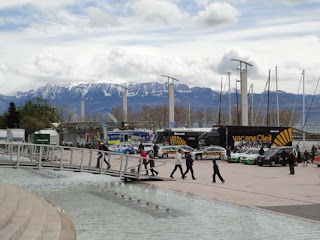 The six stage Tour de Romandie brings out the major cycling teams. Romandie is the western (French-speaking) part of Switzerland. What's the lure? It's one of the first races of the season and features multiple stages of serious climbing in the mountains. The Tour of Romandie gives teams a chance to brush off the winter rust and check out the competition. So, today's the first day and it starts right here in Lausanne with a time trial over a three mile course. Riders race not against each other but, against the clock. 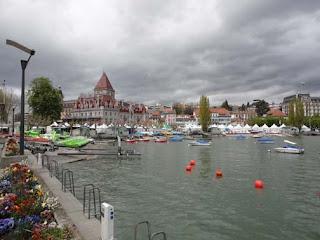 I grabbed my camera and walked the course--much of which runs along the lakefront. 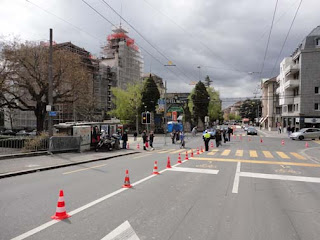 Here you can see a cyclist racing towards me. Twenty cycling teams are here. Budgets for the teams range from $5 million to over $40 million. 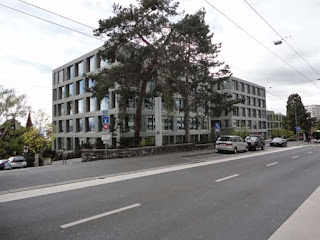 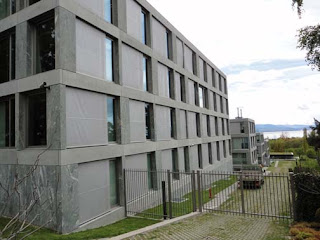 The buildings are layered and built on terraces allowing for great views of Lake Geneva and France on the other side. Almost 2,000 employees work here. 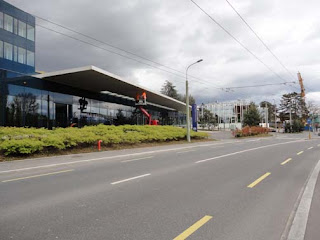 This is the bottom level of the Philip Morris buildings. Did I mention revenues for Philip Morris International totaled $31 BILLION last year? From what? Selling cigarettes, lots and lots of cigarettes. PMI has the rights to sell & market Marlboro outside the USA. 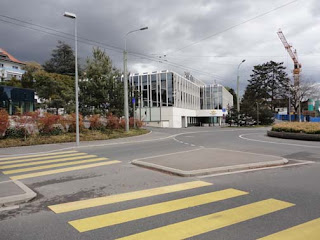 Adjacent to Philip Morris International headquarters are offices for BAT. British American Tobacco (BAT) also sells cigarettes--over $24 billion worth last year. The head office is in London. The international headquarters for Japan Tobacco (revenues last year of $74 billion) lies 30 miles away in Geneva. So, why is it that the big tobacco companies happen to have their international operations in Switzerland? Pure coincidence or more to do with the fact Swiss laws makes filing lawsuits very difficult? 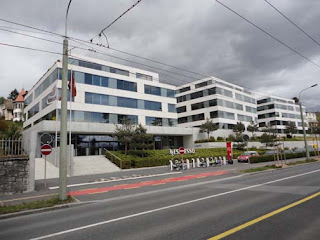 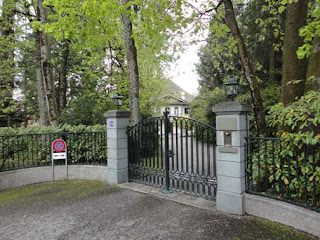 An impressive collection of mansions line the Lausanne lakefront. Spanish dictator General Franco ruled Spain with an iron fist from 1936 to his death in 1975. When Franco came into power the Spanish monarchy was forced into exile. Where did the Queen of Spain high-tail it to? This cozy little place. 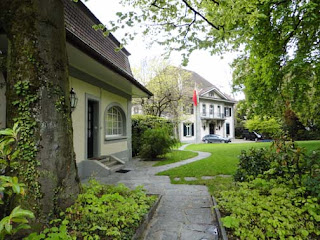 The queen lived here for many years. The building on the left was the servant's quarters. The mansion is now the head office for a Swiss brokerage firm.