Fribourg (population 43,000) is the largest city in Canton Fribourg. In the USA we have states, in Switzerland they have cantons. The dairy industry is huge here with many well-known cheeses from this region. Many supermarkets in the USA carry Gruyere cheese, the region's most well-known brand. I've posted stories about the city of Fribourg and its fantastic medieval old town but, this posting is about the surrounding area. This sign the cow is holding next to a country road basically says thanks for not throwing trash out the car window. 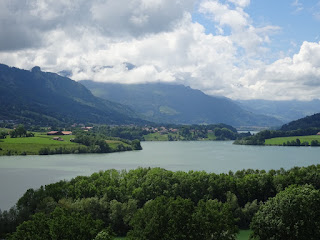 Cycling past Lake Gruyere. Don't forget you can click on each image and it'll enlarge. 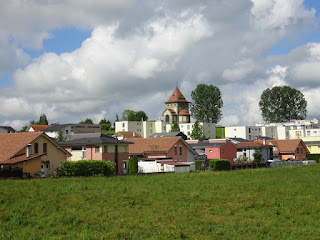 Passing through a farming village I spotted this chapel atop a hill. 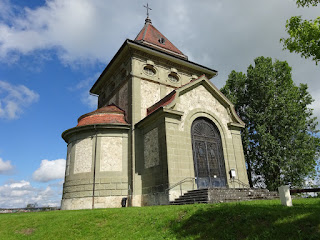 Haven't a clue as to its age but, the chapel looks out of place next to the new housing. 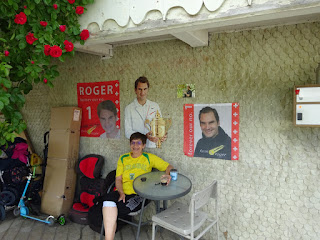 Leaving the chapel I spot this woman sitting outside her home sipping coffee.  Holy smokes, it looks like she has set-up a mini-shrine for tennis great Roger Federer. Surprised not to see a lit candle as the Swiss-born Federer enjoys god-like status in Switzerland. 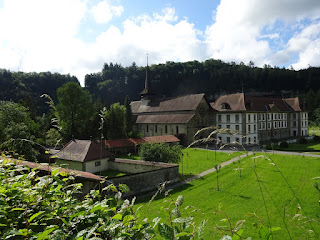 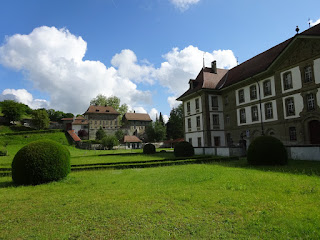 A lazy river runs past the abbey. Eight priests and 16 brothers call the place home with acres of fruit trees and farmland. 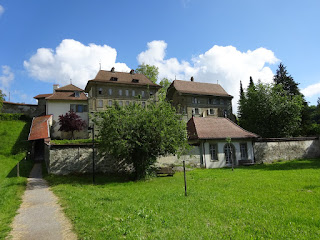 The abbey compound is walled-in and visitors enter via the covered walkway to the left of the buildings. Want to stay here? No problem, for $70, one can spend a very, very, very quiet night.
Posted by Paul the biker at 12:54 AM No comments: