On the edge of Rapperswil (population 27,000) a farmer has gone whole hog to sell his wares. 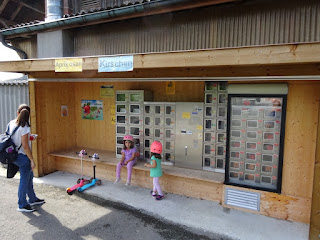 It's somewhat common finding self-service vending machines near farms dispensing fresh milk. In France I've come across many boulangeries with vending machines outside their shops for after hours shoppers who need their baguette fix. But, this farmer has gone big time with his offerings. I count 66 items for sale including apricots, cherries, apples, juices, various jams and bottles of wine. 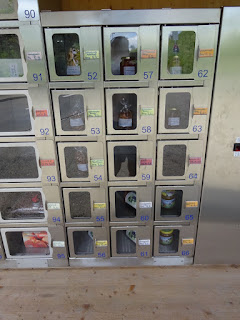 All the goodies look to be home made. But what about the wine for sale? Go to next photo. 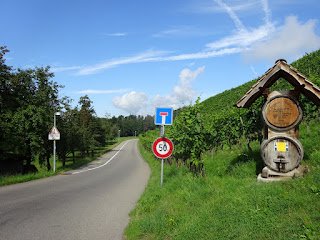 The wine is from the farmer's hillside vineyard located just a few yards away. 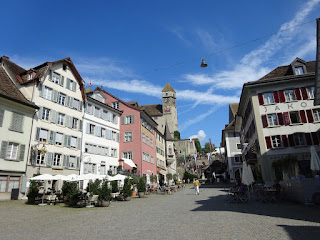 A view of downtown Rapperswil. Zurich (population 400,000) anchors one end of the lake and Rapperswil anchors the other end. 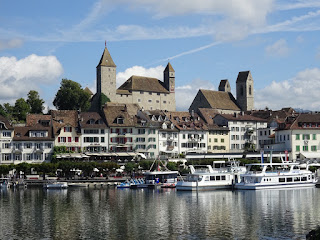 Another view of Rapperswil and its castle. 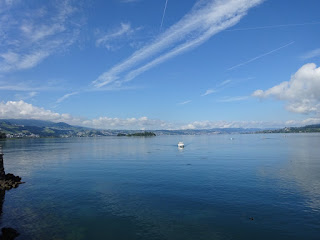 A nice day for boating on the lake. 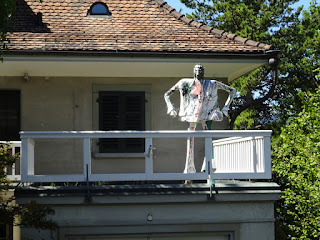 People in Zurich seem to have a thing for placing statues on their balconies. 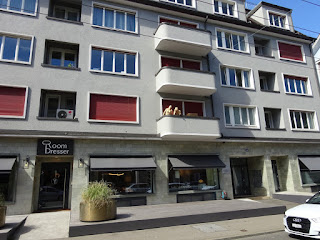 This couple is naked. 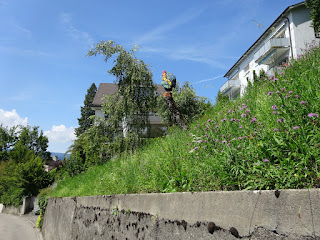 This wooden chicken rules the roost. 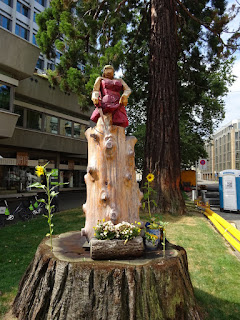 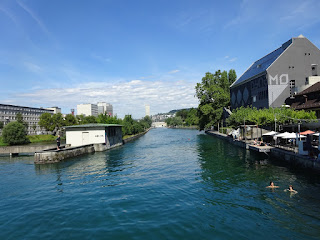 The Limmat River flows through Zurich's city center.  Part of it has been diverted and turned into a humongous fresh water, slowly flowing swimming pool for the locals. Many office workers grab a quick swim during lunch. 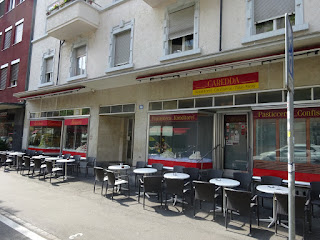 This Italian coffee shop/bakery is my "go to" place for pastries in Zurich. They have absolutely the best cannoli.
Posted by Paul the biker at 8:24 AM No comments: 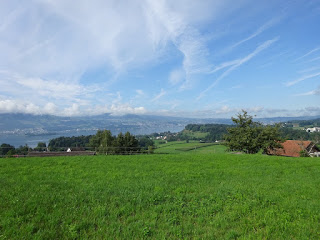 In this photo you can see Lake Zurich in the distance. It's about a 60 mile bike ride around the lake.  Steep hillsides rise up around most of the lake. Densely populated towns and villages line the shore. However, get above the ridge line of the hills and it's sparsely populated with beautiful farmland. I live in southern Switzerland (French-speaking part) and every summer my bike and I head up to northern Switzerland (German-speaking part) and do some exploring. These are photos from around the lake. 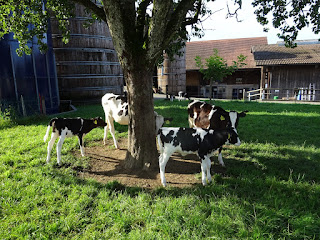 Lots of farms and cows. These are "normal" cows--- you know the ones for milk, cheese and chocolate. 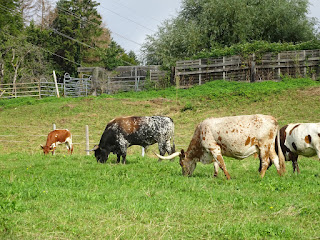 Believe it our not, these are Texas Longhorns. What the heck are they doing in Switzerland? (check out the huge horns). There's a sign posted on the fence (it's in German) but I see the words "Texas Longhorns". 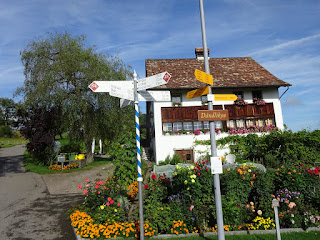 This house has lots of flowers. Click on the photo to to enlarge. 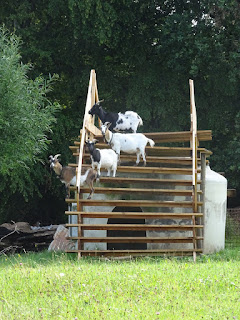 These goats climbed up on the roof to get a better look at me. 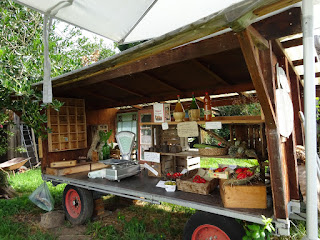 Cycling the back roads take you past farms with self-service stalls (you pay via the honor system). 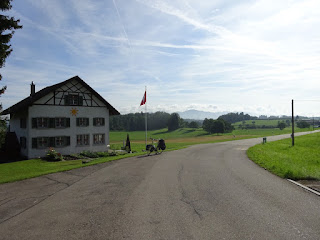 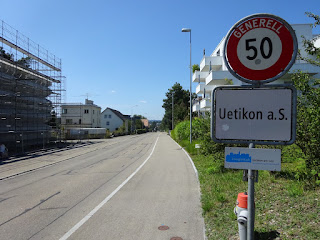 So, I've been cycling past this place for years. Note the building scaffolding on the left. Story continues with next photo. 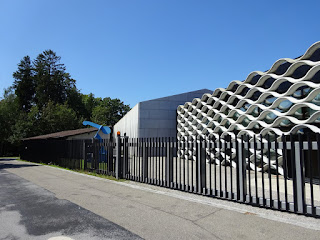 For years it was an abandoned former hydraulics factory. Located smack dab in the middle of a residential area way above Lake Zurich. Any property around Lake Zurich is mucho bucks. About four years ago I saw renovations going on at the site and I assumed the town was repurposing the site as a sports complex (indoor pool, soccer etc...). There was an onsite construction office and I walked in and asked the guy what was going on here. The man wouldn't answer me and said it was private property.  Story continues with next photo. 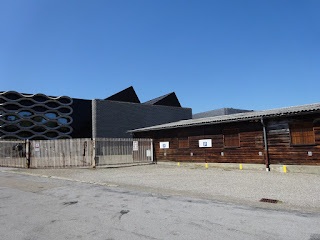 Three years ago I pedaled past the site and found several of the structures had been renovated and several more were in the process of getting a makeover. I stopped by the onsite construction office again and was again given the runaround by the same guy.  I asked him why he was being so secretive but he just shrugged his shoulders. Story continues with next photo. 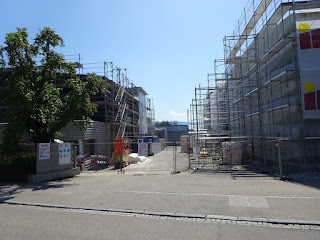 So, I went around to the backside of the site and found a mailbox with the name "Galerie Bruno Bischofberger AG" stamped on it. That night I went on the internet and found my answer as to what the heck is going on here.  Swiss born Bruno Bischofberger, 79 years old, is a very well connected art dealer and for decades had a gallery in central Zurich.  He made a fortune. How? He was responsible for bringing 20th century American pop art to Europe--including artists Jasper Johns, Roy Lichtenstein and Robert Rauschenberg.  However, his big claim to fame was his longtime business relationship with Andy Warhol. In 1968 Bischofberger entered a "first right of refusal" contract with Warhol and it lasted until the artist's death in 1987. In other words, he got first dibs on Warhol's works. Story continues with next photo. 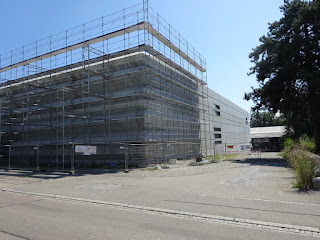 Bischofberger lives close by and has a huge personal collection of not only 20th century art but, Swiss folk art, furniture, glassware, ceramics, silver and more.  So far, six buildings here have been converted from industrial sheds including three clad in concrete and three in aluminum or steel. Who's responsible for each building's design? His daughter and son-in-law, both of whom are architects. Oh, and one more little tidbit. So far, there's 250,000 square feet of space for Bischofberger to show and store his collection. To put that in perspective: an American football field (including the end zones) is 57,600 feet ------put five of those together and you've got the size of Bischofberger campus. Supposedly when all the construction is finished it'll be open to the public. 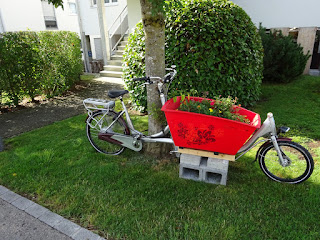 Saw this out front of a home. Another view of Lake Zurich from high above. 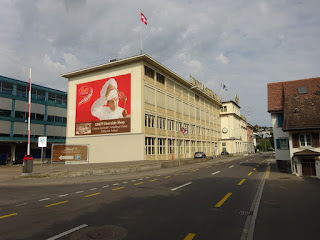 On the shoreline road that wraps around the lake you pass the head office and original factory of chocolate heavyweight Lindt & Sprungli. The smell of chocolate is always in the air. 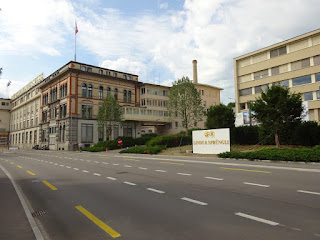 Don't recognize the Lindt name? Their high-end chocolate is big in Europe. Company revenues were over $4 billion last year. They've been located at this site since 1899.  Did you know the company bought Ghirardelli in 1998 and bought Russell Stover candies and Whitman's chocolates in the USA back in 2014?
Posted by Paul the biker at 1:39 AM No comments: