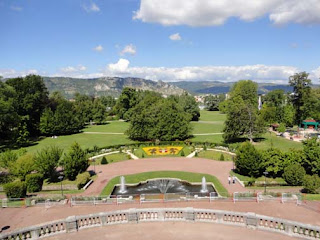 Heading 60 miles south of Lyon (France's second largest city) brings me to Valence, population 65,000. Situated in a narrow valley, this is a view from the town center toward a large park and the Rhone river (hidden behind the trees). 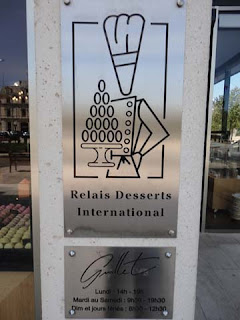 I think you know by now that I have a severe sweet tooth and will go to great lengths to satisfy it. Relais Desserts International is an association of pastry chefs. Let me rephrase that--Relais Desserts International is a clickish club of superb high-end pastry makers. With roughly 100 members (majority of them in France) and membership highly restricted, this prestigious sign outside posted outside a store should make your heart start to flutter because you KNOW you are about to enter a place overflowing with a multitude of delectable delights. 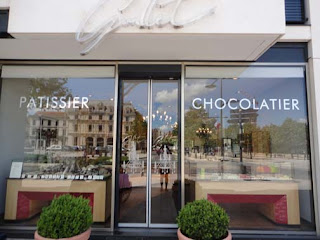 Daniel Guillet, chocolatier, was creating tasty sweets 40 years ago and now his son, Luc, is continuing the tradition. 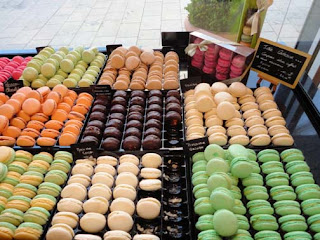 Macaroons set the bar. If these delicate and fragile treats are subpar then I don't even bother with the other pastries. 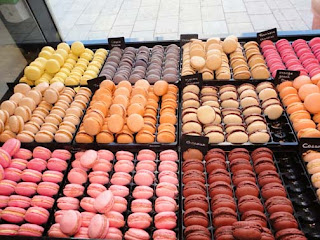 Holy moly! the pistachio cherry as well as the caramel macarooons are fantastic! We have ourselves a winner! 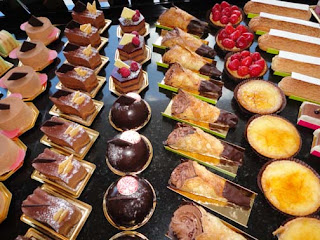 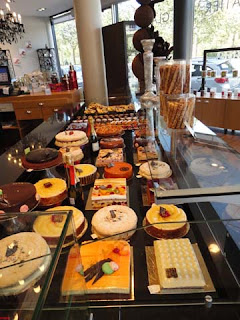 This is the 20th member of the Relais Desserts International visited. 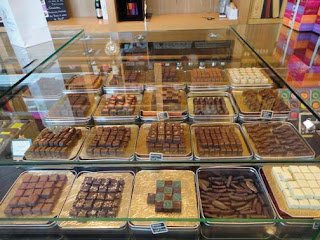 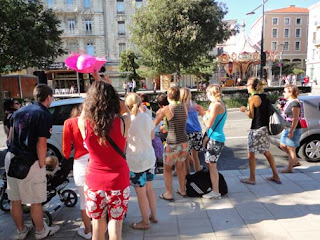 It took a few minutes to figure out what was going on here at a stoplight in downtown Valence. 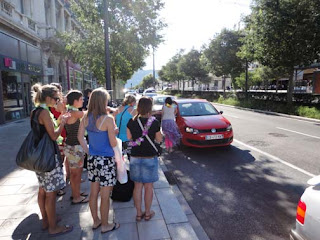 The woman approaching the red car was getting married and her women friends were taking her around town having her do strange things such as asking cars at the stoplight if she can wash their windows and then actually washing them. About half an hour earlier I saw a young man dressed in a parrot costume being led around town on a rope by half a dozen laughing similar age men. 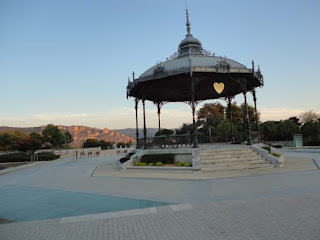 Leaving town at six in the morning I cycled passed the park and snapped this shot of the sun coming up with the 150 year-old kiosque and it's famous heart. Never mind the two guys asleep underneath.
Posted by Paul the biker at 1:41 AM 1 comment:

Hallwyl castle lies at the northen end of Lake Hallwil. It has been around since 1256.
Unusual for Swiss castles, it's surrounded by a moat.
The castle complex sits on two separate islands, one man-made.
Since 1994 the castle has been owned by the canton Aargau (cantons in Switzerland are similar to states in the USA).
This is the courtyard area of the front part of the complex.
View of the moat from the rear.
I haven't been able to figure out if this barber, standing outside a hair salon, is male or female.
I bet he makes great pizza.
Pig outside a butcher shop.
Posted by Paul the biker at 11:50 PM 1 comment:

With its location atop a hill, Lenzburg castle has been lording over the people of Lenzburg (population 8,500) since the 11th century.


This is part of the castle's courtyard complex
Another view of courtyard. Through the centuries owners of Lenzburg castle have included kings, counts, dukes---even an emperor.
In 1892 American industrialist Augustus Edward Jessup bought the castle. In disrepair, Lenzburg castle underwent a comprehensive renovation.
More from the castle courtyard.
Another courtyard view.
In 1911, Lenzburg castle was sold to another American industrialist magnate, James W. Ellsworth. The castle is now owned by the town of Lenzburg and the canton Aargau. The castle's largest room Knight's Hall, is now used for concerts, weddings seminars
Formal gardens past the courtyard area.
View of the town from the castle walls.
This is the main entrance into the castle (via drawbridge).
Walkway outside the castle walls.
Posted by Paul the biker at 12:22 AM No comments:

The Swiss Military Museum stands about a half mile from my previous post of Fort Reuenthal. Having these two attractions so close to each other is a real treat. On the left hand side in the photo you can see a silo from a nearby nuclear reactor. The tall building in the right side of the photo houses the museum. That's a corn field on the left side of the road. The Rhine River lies a few hundred yards to the right of the museum.

The building looks to have been part of an old factory complex with a rail siding for trains still in use.
The museum is spread over multiple levels with 60,000 square feet of exhibition space.
On display are battle tanks, armoured personnel carriers, artillery, transport vehicles, air defense, anti-tank and artillery guns of various calibers. They give an overview of the development of arms and vehicles of the 20th century of the Swiss armed forces as well as foreign armies. The collection includes rarities like a Russian battle tank T 34/85 and German V-1 flying bomb.

Collection of miliary bicycles.
Military motorcycles.
Anti-aircraft artillery.
The rapid fire Gatling gun was invented during the American Civil War. This is a vastly updated version.

This is the ammo used in the updated Gatling gun.

Posted by Paul the biker at 1:52 AM No comments:

Switzerland was neutral during World War II but extensive fortifications were built along its borders--especially with Germany. Built between 1937-1939, Fort Reuenthal sits on a high ridge overlooking the Rhine River and its purpose was to prevent the Germans from crossing the Rhine at the nearby hydroelectric plant. Above is one of four artillary blocks. Two were armed with 75 mm guns and two with machine guns.

So, this looks like a big boulder correct?
Nope, the fake exterior opens and a machine gun has you in its sights.
Deactivated as a military post in 1988, it's operated as a museum--open on the weekends. This is the entrance.
Walking in past the big vault-like door you can see the tracks on the ground where supplies were wheeled into the main tunnel. The tunnel runs about 900 feet (the length of three football fields).
Strangely, making my way down the long tunnel the usual damp, corroding metal pipe smells I've normally experienced visiting these underground fortifications has been replaced by the strong aroma of home cooking.
This is one of the 75 mm guns.
Well, all these people in the fort's underground canteen explains the smell of food and the tour bus I saw parked outside. Evidently, tours can be booked which includes lunch.
To the right, guns are at the ready-just like when the fort was active. To the left are display cases.
I love visiting these places especially those that allow you to wander without having to travel in a guided group. I saw this opening off the main tunnel and started down. It seem to go on forever, going down 20 steps, then a straight walk, then down 20 more steps, then a long straight away, then down more steps and so on until it ended with the tunnel seeming to go on but the lights were off. I found the light switch and the tunnel seem to continue. I wanted to continue but assummed the lights were turned off because they didn't want visitors to go further. Disappointed, I retraced my way back to the main tunnel where I came across one of the volunteers. The man spoke only a little English and I explained the tunnel coming to an unexpected end with the light being off. He said that shouldn't be the case. I decided to return down the tunnel and knew the man wouldn't join me because it's quite a long walk with plenty of steep steps and he's in his early 70's. It is one heck of a long walk (find out later this tunnel is 951 feet long) and the end is very disappointing as it leads to a dead-end with a very, very long blocked-off ladder which I assume leads to the surface.

Returning to the main tunnel I come across a volunteer who speaks impeccable English and ask him about the long side tunnel I just explored. This underground fortress was built by a contractor and when the military moved in they found a big flaw: if this fortification came under attack the only escape was via an opening right underneath one of the 75 mm guns--meaning you were exposed to enemy fire! So, the military ordered the contractor to build an escape tunnel (the one I just traversed). I explained to the volunteer my going down the tunnel twice due to the lights being off. He said they do that on purpose (turning the lights off) to discourage visitors from going further. "Why?", I ask. He answers, "people get claustrophobic down there". Boy he got that right! I recall when almost reaching the far end of the tunnel I nearly slipped on the wet floor and remember saying to myself how if I fell and broke a leg and started yelling-- nobody would hear me because I was so far underground and isolated.
Posted by Paul the biker at 1:28 AM No comments: