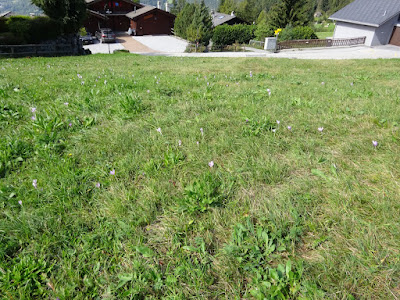 This is the downhill part of of my day trip visit to Crans-Montana. Instead of cycling back to Sierre (an hour downhill bike ride without having to pedal!) I'm taking another route that'll take me down the mountain but bring me a further six miles up the valley floor to Sion. What's with this picture of grass? Here it is the end of September and these wild pink flowers are blooming. Actually, this photo was taken right across the street from the chalet in the next photo that I'll be talking about. 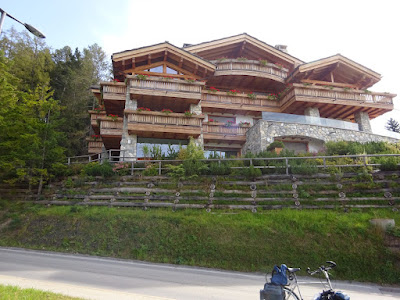 This recently built chalet lies on the outskirts of Crans-Montana and probably couldn't be built if it was in the town limits. Why? Thank Russian oligarchs. Years ago Russian oligarchs pretty much invaded Switzerland buying up big bucks properties in the high-end ski resorts like St. Moritz, Gstaad and Crans-Montana. Alarmed by this invasion, laws were enacted severely restricting where and what foreigners could purchase. Many properties would be used for a month (usually over Christmas) and sit empty the rest of the year. Laws were passed saying the properties had to be available for rent when not in use. 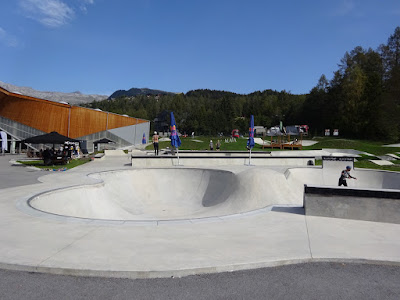 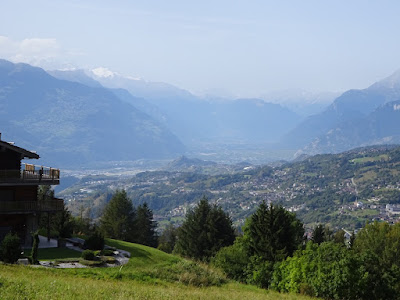 Lots of villages dot the landscape. 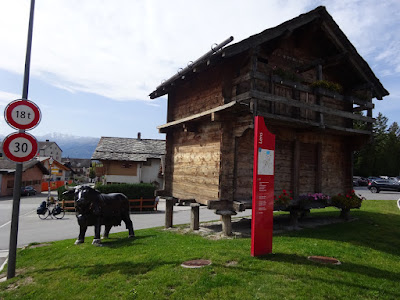 This cow and farmer's hut greets visitors to Lens, population 4,100. The hut dates back to 1818. In the summer farmers would bring their cows up the mountain to graze and the farmer's lodging was definitely no-frills. 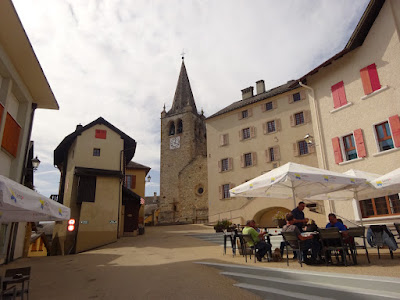 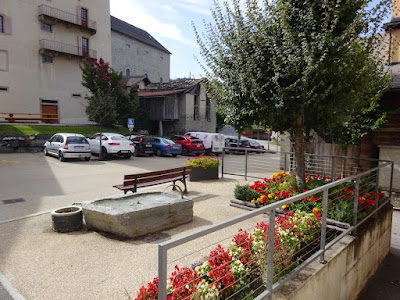 Water fountain in Lens. Definitely had to stop and fill my water bottle here. Why? Crans-Montana has several water fountains but signs say the water is "non potable". That means it isn't safe to drink. In Crans-Montana I went to the tourist center and asked why. Usually it means there's something wrong with the groundwater but, how can that be the case way up here in the mountains? The young guy manning the counter at the visitor center had no answer. 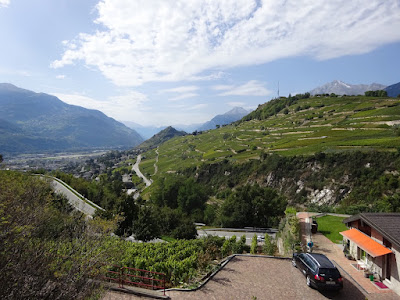 Lots of vineyards dot the mountain sides as I near Sion (population 34,000). Back around 2016, officials in Crans-Montana and Sion were contemplating putting in a joint bid to host the 2022 Winter Olympics. With the headquarters of the International Olympic Committee in nearby Lausanne it seemed they would have the inside track. However, locals put it to a vote and the result was "no way Jose". 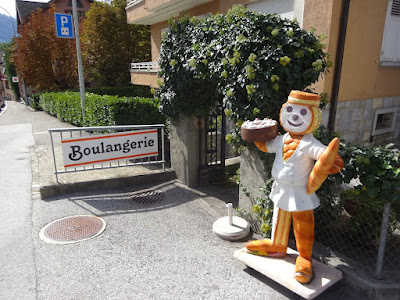 Here's my buddy outside a patisserie. Haven't figured out how he manages to be outside multiple shops at once. By the way, I peeked in the shop and nothing looked good. 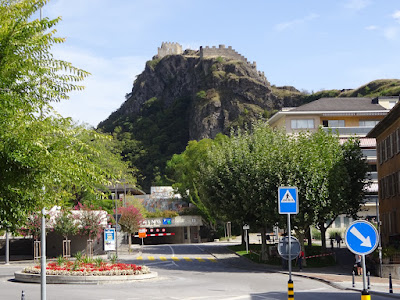 I'm in Sion and up on the hill stands the ruins of Tourbillon Castle. 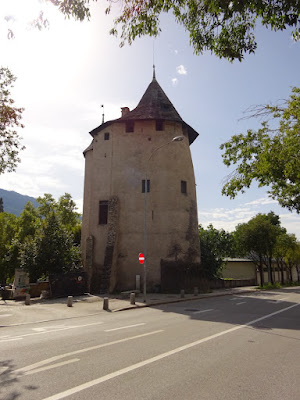 In medieval times Sion was walled-in with multiple towers. This is the last surviving tower. Known as the Sorcerer's or Witches' Tower. Why? Doesn't the roof remind you of a witches hat? Used as a prison for many years. 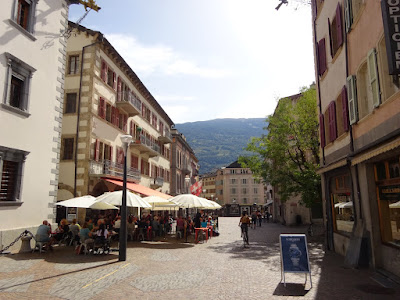 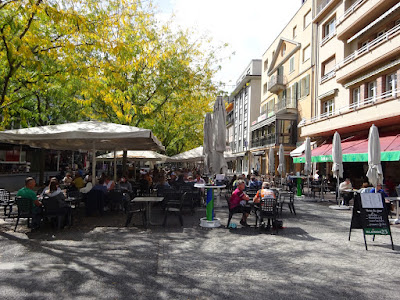 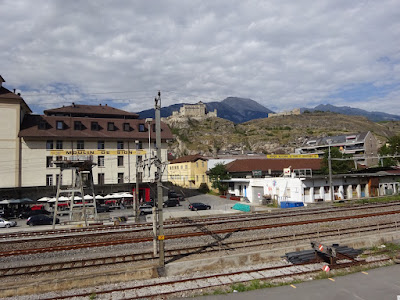 In the background you see two complexes. On the one hill is Valere Basilica, a fortified church. To the right are the ruins of Tourbillon Castle, which I showed you in an earlier photo. It's a pain in the rear getting up to those two places-with no paved road. Both were built in the 1200's. Who resided in Tourbillon Castle? Why, the most powerful and richest man in the valley--the Bishop of Sion. Years ago I went up to check out both places--locking my bike at the church and then hiked along a narrow trail to the castle ruins. My thoughts? How the heck did they lug all the material up there 800 years ago? Amazing. Also, what a pain it must have been for locals on Sunday to have to hike up there for Sunday service.
Posted by Paul the biker at 1:20 AM