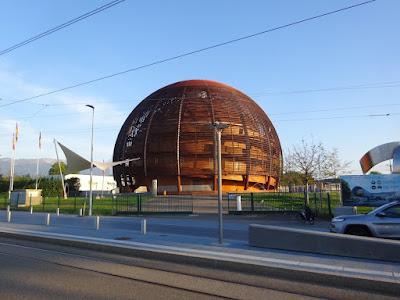 I have a hankering for some pastries from one of my favorite patisseries. That means cycling into France. So today I start in Geneva and will do a 35 mile loop crossing into France then following the border and returning to Geneva. I'm out near Geneva's airport---what's with this brown building? It's the visitor center for CERN. 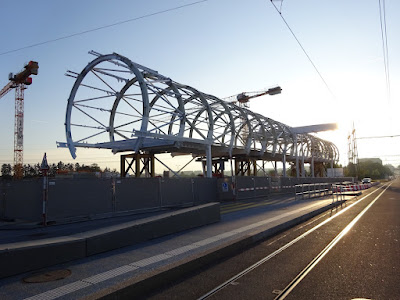 And what's with this new construction? 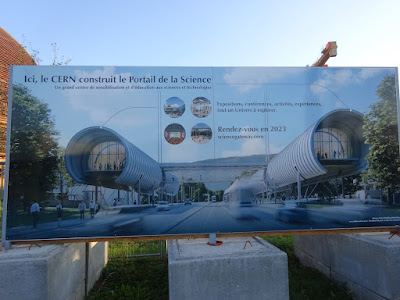 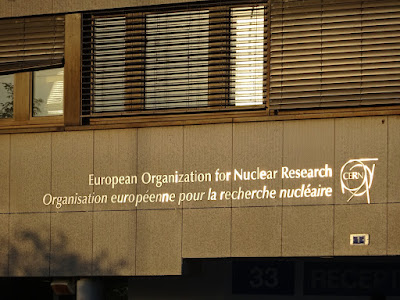 CERN is a European research organization that operates the largest particle physics laboratory in the world. Formed in 1952, CERN is an acronym for Council European for Research Nuclear. In 1954 the name was changed to European Organization for Nuclear Research (EONR). However, the powers that be decided that EONR was awkward and continued to use CERN. So, I still haven't answered why are they building cylinder-shaped tubes for crossing the road. Well, keep reading.

Over 2,500 scientists, technicians and administrative staff work here. Twenty-three European countries contribute money--last year they gave over $1.1 billion. How come the USA isn't involved? Well, we have our own physics laboratory (Fermilab) outside of Chicago with over 1,750 employees and $545 million in funding.

In 1989 an English scientist (Tim Berners-Lee) at CERN was working on how to allow scientists from around the world to access all the data CERN was spewing out. He invented the World Wide Web (WWW) commonly known as the Web. 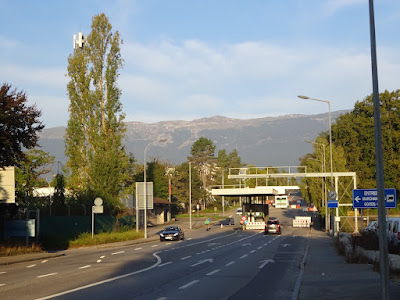 On the left is the huge CERN campus with more than 50 buildings. Up ahead that's the Swiss/France border crossing in the photo. It wasn't manned this morning. The CERN campus lies partially in Switzerland and partially in France. That's the beginning of the Jura mountains in the background. 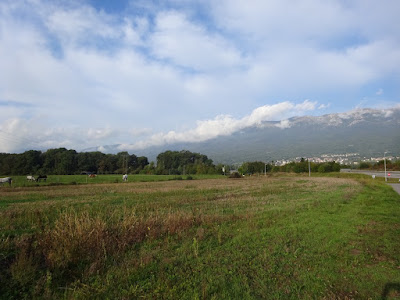 So, I still haven't answered why the new pedestrian bridge being built is cylinder-shaped. Over 320 feet underground here is a cylinder-shaped tunnel (accelerator ring) housing Large Hadron Collider (LHC), the world's largest and highest-energy particle collider. This underground circular sucker is 18 miles around. In the photo above I'm about five miles from CERN and unbeknownst to the grazing cows and horses there's a tunnel 320 feet down. I'm six feet tall--if you stack 53 of me on top of each other--that's how deep below ground the tunnel lies!
Are all those scientists at CERN helping make life better for us? I don't know but, I have an idea. Divert the billion dollars in funding for one year, gather all those smartie-pants scientists and technicians and have them work on two much more important projects:
1). Do something about computer hacking.
2). Do something about the never-ending phone calls I get with the caller telling me that they can see from their location that there's something wrong with Microsoft on my computer and they can help me fix it. From the scammers voices it sounds like they're calling from the Philippines. I used to hang-up after angrily telling them it isn't possible because I use an Apple. Now, I let them go on for a few minutes with their spiel before telling them I use Apple. The last time, the woman hung-up after calling me obscenities. 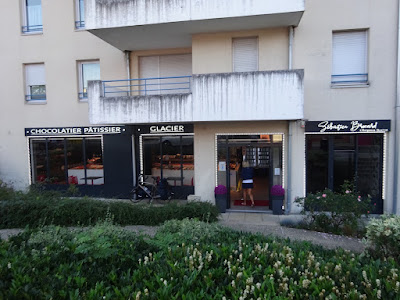 Here's the outside of Sebastien Brocard's patisserie in Saint-Genis-Pouilly, France (population 12,000). 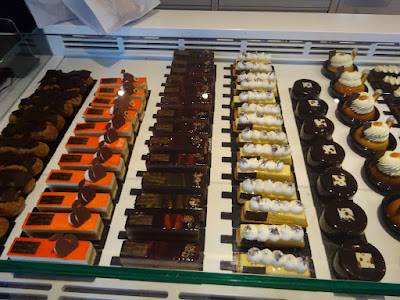 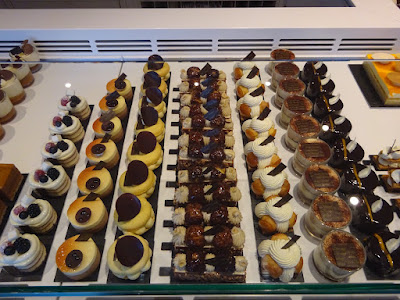 I also took a three chocolate dessert--it's the second round dessert from the left (there're seven of them in the row). It has white chocolate, dark chocolate and milk chocolate. 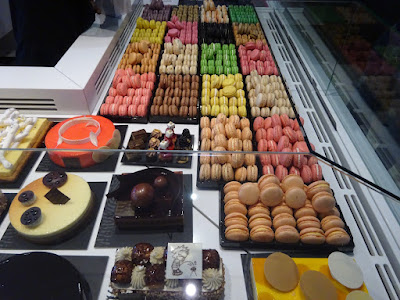 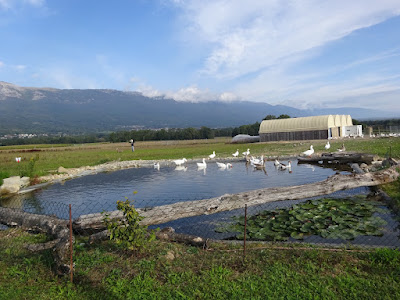 Came across the geese farm. What caught my attention was the scarecrow in the back. 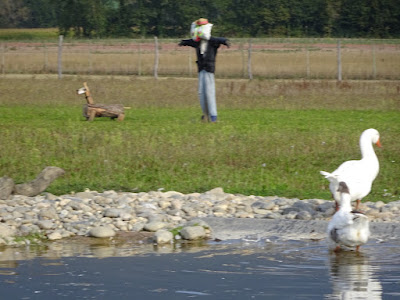 Closer inspection with my zoom camera shows the scarecrow has a companion made out of wood. 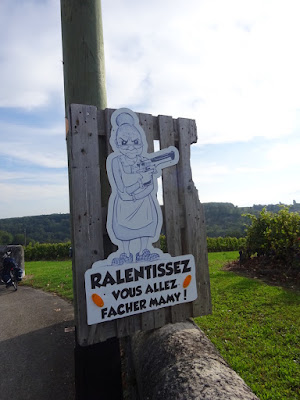 I'm on a backroad with vineyards for miles around. This sign says to slow down or else you'll have to deal with an angry momma! 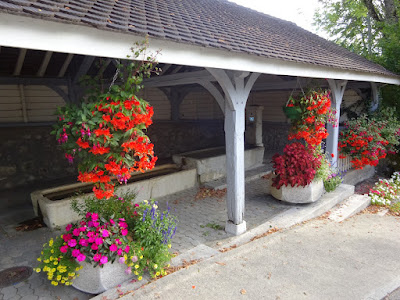 Water fountain with flowers.
Posted by Paul the biker at 3:11 AM